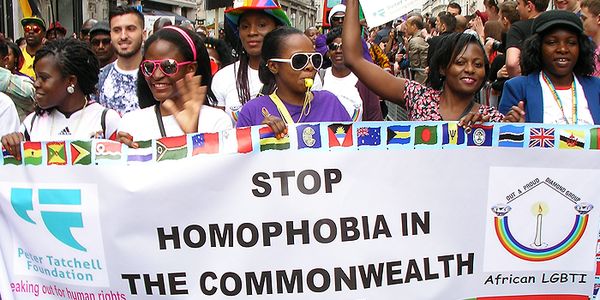 Stop LGBTI persecution in the Commonwealth

The Commonwealth Heads of Government Meeting (CHOGM) will take place in the UK in April 2018. We urge the CHOGM 2018 organisers to:

We appeal to all Commonwealth countries to:

The Commonwealth Heads of Government Meeting (CHOGM) has never in its entire six-decade history discussed LGBTI human rights. The time has come.

37 out of the 53 member countries of the Commonwealth criminalise same-sex relations. They account for half of the world's nations where homosexuality is illegal. Most of these countries inherited their anti-gay laws from Britain during the period of colonial rule; making these laws a hang-over from the colonial era.

At least nine of these 37 countries have a maximum sentence of life imprisonment for same-sex acts and there is the death penalty in parts of northern Nigeria and rural Pakistan.

Hate crimes against LGBTI people often pass unchecked in most Commonwealth countries, with frequent mob violence. The majority of LGBTIs living in Commonwealth states have no legal protection against discrimination in employment, housing and the provision of goods and services.

We urge CHOGM 2018 to lead the way in raising awareness of LGBTI rights as human rights and to act to remedy LGBTI rights abuses.

Four out of five Commonwealth countries, which are signatories to the Charter, have failed to adhere to its principles and the Commonwealth has failed to ensure that these nations respect the human rights of their LGBTI citizens.

The criminalisation of LGBTI people in Commonwealth countries often goes hand-in-hand with other human rights violations, such as restrictions on free speech and the right to protest/strike, media censorship and discrimination against women and ethnic and faith minorities.

We stand in solidarity with all Commonwealth citizens who are victims of human rights abuses.

Care2 says:
Please sign the petition now to urge the leaders of Commonwealth Countries to discuss LGBTI rights at their upcoming meeting.