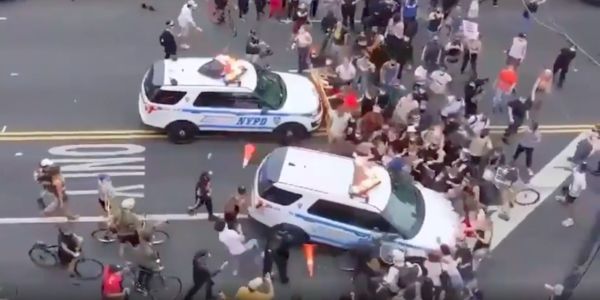 It shouldn't take a global body of lawmakers to tell us that killing unarmed civilians is WRONG. But apparently that is what we need here in the United States.

International human rights laws protect the right to protest, and the right to be safe from excessive and unnecessary force by police. These are laws that the majority of nations around the entire world have agreed upon — including the United States. There is only one way to understand this: government leaders in the United States are breaking international law when they allow law "enforcement" officers to beat, taze, tear gas, shoot, and brutalize protesters, members of the Black community, and even multiple journalists.

Sign the petition to demand that the United Nations decry racist police violence as a violation of human rights!

In fact, rather than respecting and safeguarding civilians' rights, the U.S. has gone the opposite direction. Our leaders have militarized local police forces, outfitting them in combat-level riot gear, providing military-grade weapons, and giving them literal tanks. This level of escalation has given those who've sworn to "serve and protect" the misguided notion that they're a paramilitary unit of their own, and encouraged the idea that they're at war — with the people.

And when the people took to the streets at the end of May 2020 to peacefully protest the murder of Geroge Floyd — an unarmed Black man who was murdered by officers in broad daylight — police initiated the violence at many, if not all, protests across the country that eventually turned into full blown riots. There are countless videos documenting police brutality during demonstrations in cities across the nation, including police ramming and even running over crowds with their cars, shooting and injuring journalists with rubber bullets, beating peaceful protestors with batons, and using teargas — a chemical weapon that impairs respiratory functioning in the midst of a pandemic — on peaceful protestors.

Major human rights organizations from Amnesty International to the NAACP are condemning these state-sponsored slayings of unarmed Black folks and ruthlessness towards protesters and urging the United Nations to recognize these racist atrocities as inherently unjust.

Support our First Amendment rights! Call on the United Nations to intervene and call this what it is: a violation of international human rights!
Sign Petition
SHAREShare With FriendsTWEETEMAILEMBED
Sign Petition
See more petitions:
You have JavaScript disabled. Without it, our site might not function properly.