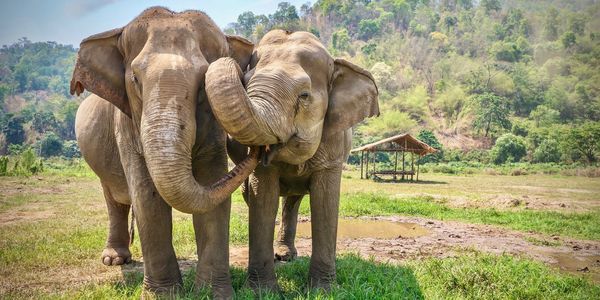 Daisy the Elephant Was Freed From a Life of Torture, But 2,500 Elephants Still Suffer

April of 2020 marked a year of freedom for Daisy, a fifty-year-old elephant whose previous life of captivity and slavery left her physically scarred, partially blind, and mentally anguished. She was one of the last captive elephants left in Delhi, the capital territory of India, who were all rescued in 2019 and sent to sanctuaries to safely pass the rest of their lives. But in the rest of the country, more than 2,500 elephants still languish in captivity.

Sign the petition asking the Indian government to grant these elephants the same freedom that Daisy mercifully received. End the cruel tradition of captive elephants in India!

These elephants are still forced to earn money for their owners in the most demeaning and often painful ways -- begging on cramped city streets, carrying tourists around on their backs, posing unnaturally for pictures. Daisy's collage of scars covering her body tell the story of what happens when these elephants are disobedient -- sharp hooks are dug into their bodies, over and over, until they submit to their handlers. This method of "obedience training" is aptly named "the crush" and it's used on captive elephants everywhere to force them into submission.

Crowded city streets offer the highest earning potential for begging and performing elephants -- and the highest potential for trauma. Daisy's feet, for example, were left painfully disfigured from her harsh environment and lack of care. Screaming crowds, blaring horns, and terrible air quality take their toll on these elephants, mentally and physically.

Daisy was rescued after a ruling in 2016 found Delhi an unsuitable place for elephants to be kept captive. But no place exists where it would be suitable to keep these animals prisoner, forced to perform grueling tasks for human gain and isolated from their own kind. India must finally take action, passing legislation to protect every last captive elephant within its borders.

Help us celebrate Daisy's freedom anniversary by obtaining freedom for more like her. Sign the petition and demand that India's government ban the captivity of elephants today!
Sign Petition
SHAREShare this petition with friends!TWEETEMAILEMBED
Sign Petition
See more petitions:
You have JavaScript disabled. Without it, our site might not function properly.

Care2
Daisy the Elephant Was Freed From a Life of Torture, But 2,500 Elephants Still Suffer
SHARETWEET