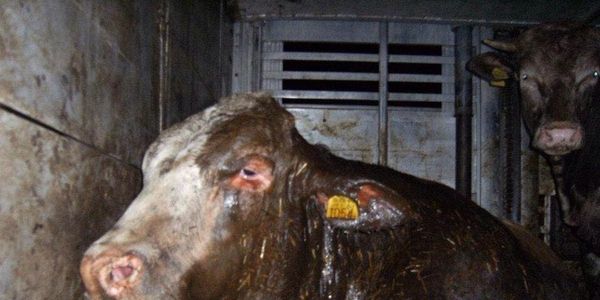 Mr. Van Goethem, We (citizens of the EU) Demand a one off 8 Hours Maximum Journey Time for All Animals In Transport within the EU and to Third nations.

We speak as voices for the millions of animals that suffer every single day enduring long distance (and time) live transport.  We are producing this petition to reduce animal transport times in the EU and to Third nations (from the EU) to a ONE OFF maximum journey time of 8 (eight) hours MAXIMUM.

The current hours endured by animals in transport throughout the EU, and also those exported from the EU to Third countries are far too excessive. All animals therefore suffer terribly as a result. The EU Directorate – of which you are a Director, does not enforce its own existing regulation to protect animals in transport.

We are formally requesting that the existing EU Regulation (currently Regulation 1/2005 for the alleged ‘welfare of animals in transport’) is amended to reduce all animal transport times to a one off journey time of 8 hours maximum rather than the time variations for different species as defined in the current legislation. Out letter to the Director Van Goethem thus reads:

Dear Sir (Mr. Van Goethem),
In the context of the 8hours campaign in 2012, more than 1,200,000 (1 million 200 thousand) citizens asked the EU Commission to limit all livestock transportation to a one off 8 hours maximum. Every year due to the existing and non enforced ‘EU legislation’, millions of farm animals suffer during long-distance transport across Europe and to other Third countries such as Turkey.

They are transported for very long period and exposed to extreme variations in temperatures, both of which are non compliant with the regulations set by EU regulation. In addition, only some animals (say those near to water dispensers) making up any particular consignment are lucky enough to receive very limited rations of food and water; often many get nothing. – In addition, the legally required rest breaks detailed in the regulation are also very often ignored by EU international livestock hauliers. Again, the EU Directorate; of which you are a Director, takes no action to make things any better for these animals.

It is inconceivable that the EU Commission has completely ignored the requests of over 1,2 million EU citizens asking to limit animal transports to a maximum one off journey time of 8 hours. You are failing us, the citizens of the EU, and you are failing the animals of the EU.
According to EU Regulation No. 1/2005, which is supposed to ‘protect’ animals during transport, but does anything but protect; the following freedoms should apply to all animals during transport:

All of these freedoms are regularly being breached during long-lasting international transport, especially to locations such as Turkey from EU states.
Regulation 1/2005 exists only on paper to show the EU public there are so- called legislative rules. But the EU, of which you are a Veterinary Director, is not enforcing the existing regulation in any way; and so the legislation really means nothing – it is utterly useless paper ‘nothing’; and the livestock haulage industry know this as well as your failures to enforce the legislation.

The demands defined in 1/2005 are not respected by several existing EU member states, and you do nothing legally to even try to enforce them. Examples of the failures we are talking about can be seen in the videos referenced below for example; especially in this case regarding animals exported from the EU to Turkey.

All the video evidence above as well as meetings between you and animal welfare organisations have ended with the disappointing but simple response from you: “We cannot do anything”.

On behalf of EU citizens, we thus question the EU enforcement of Regulation 1/2005, and say that if legislation is not rigidly enforced, then why does it exist in the first place ? – as we said, just a paper, mean nothing lump of regulation.

EU officials / Commissioners, who could start to amend animal transport legislation immediately, have remained inactive and very quiet for a very long time. Regulation 1/2005 for animals in transport ‘protection’, which originally became law in December 2004, is utterly ineffective as EU officials including yourself take no action whatsoever to enforce it.

According to the Lisbon Treaty, one million people who have to come from several EU Member States, can use the ‘citizens’ initiative’ to ask the European Commission to submit new political proposals. These 1,2 million people calling for 8 hour transport legislation have not yet been able to stop the misery of the transport of animals for time periods over 8 hours. Times need to change and you need to be held responsible.

Therefore, we are now asking you, a ‘Veterinary Director’ at the EU, to make sure that these animal transports within EU member states, and also all exports to Third nations such as EU – Turkey transportation; are timed to a one off maximum journey time of no more than eight (8) hours.

Please use your influence as a ‘vet’ – someone who allegedly should care about the welfare of animals, so that the existing laws on the implementation on animal transports are finally adapted for once and all to reflect a one off maximum journey time of no more than 8 hours as the citizens of Europe request. This ruling must apply for transport across the whole of the EU and for export to Third countries such as Turkey. Only for specific situations such as Scottish animals being shipped from islands to the mainland should their be additional but limited hours.

Thank you for your time and consideration of our very important ‘citizens’ initiative’ request. We are watching your future actions to see if the ‘EU Veterinary Director’ actually does anything for the improvement of ‘animal welfare’ – and animals currently suffering during transport.

Care2
Mr. Van Goethem, We (citizens of the EU) Demand a one off 8 Hours Maximum Journey Time for All Animals In Transport within the EU and to Third nations.
SHARETWEET