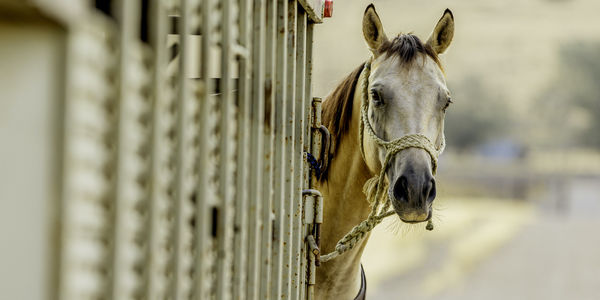 Many of us have seen the ways that cars get transported on the freeway. Stacked up two-vehicles high on double-decker trailers, they're strapped in tight because one wrong move could spell destruction for them — and for others.

Did you know that horses are frequently transported the same way? In fact, sometimes they're stacked up in not just two levels — but even higher. This is clearly unsafe and has resulted in gruesome horse deaths over the years. It must end now!

Sign the petition to keep animals safe by banning inhumane treatment of horses during transit!

This may seem like no big deal to anyone who's been fortunate enough not to witness the horrific tragedies caused by huge overturned trucks, stacked sky-high with living horses. But in fact, it's such a big deal that Congress recently introduced the Horse Transportation Safety Act (HTSA) and already has 113 bipartisan co-sponsors. That's more than one-quarter of the U.S. House of Representatives, encompassing both Democrats and Republicans.

These types of double-decker horse trailers are dangerous in numerous ways. First, they're not actually tall enough for the horses to begin with; horses are squeezed into unnaturally cramped conditions for hours at a time, unable to even fully lift their heads. The poor animals can't shift, turn, or even keep their balance, leading to painful falls and other injuries. On top of that, there are issues with heat and air circulation, creating stifling, torturous conditions for these animals.

And then there are the crashes. One of the most well-known occurred back in 2007, when a double-deck trailer driving through Illinois overturned while it was carting 59 large Belgian draft horses across state lines. Nineteen of these animals perished on the road — some dying immediately from the destruction, while many others were euthanized due to their excruciating injuries. It took one committed veterinarian five hours to get each and every last horse — living or dead — out of the wreckage of the trailer.

But just because more than 25% of U.S. Representatives have signaled their support for this legislation doesn't mean it will pass. A similar bill was introduced back in 2019 but died before the Senate could vote on it. That will take all of us making a stand and saying that we want this bill passed, now!

Sign the petition to demand that Congress pass the Horse Transportation Safety Act before more innocent animals die horrific deaths!
Sign Petition
SHAREShare this petition with friends!TWEETEMAILEMBED
Sign Petition
See more petitions:
You have JavaScript disabled. Without it, our site might not function properly.