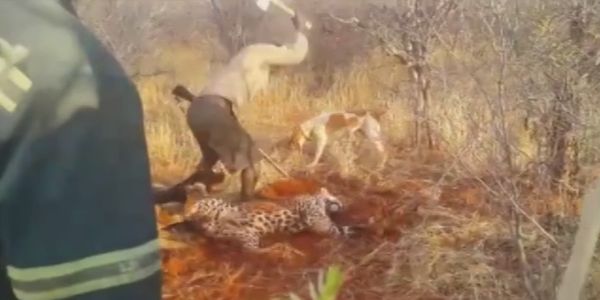 In a horrific act of violence earlier this year in Namibia, a group of men laughed as they watched a live trapped leopard being brutally mauled by dogs before themselves taking turns bludgeoning the young animal to death. It is a disgrace that such cruelty may be perfectly legal under Namibia's laws which allow the killing of "problem-causing" wildlife when defending human or animal life.

Leopards are threatened with extinction and are in critical need of increased protections. Namibia's wildlife deserves better. The country's regulations leave the door wide open to abuse and cruelty because they do not specify appropriate and humane kill methods; are missing robust procedures to ensure that animals targeted as "problem-causing" are a proven threat; and do not require that non-lethal mitigation take place prior to killing. It is reported that cruelty similar to what is depicted in the video happens frequently and is rarely, if ever, investigated.

Don't let this beautiful animal's death be in vain! Sign on and write to the Namibian authorities so that this leopard's story can change the future of how these majestic cats are treated.
read petition letter ▾

The killing of this leopard lasts for several minutes, during which time attacking dogs rip flesh from the animal while he is still alive and a group of up to four men stand watching and laughing. The men then take turns beating the leopard with large sticks, while the dogs continue the attack. The violent assault ends when one man bludgeons the leopard's head with an axe handle continuously for more than 40 seconds and kills the animal.

It is likely that the leopard was killed because he was deemed a "problem-causing" animal. If the cruel and protracted killing of the leopard involved illegal conduct, I call on you to bring all perpetrators to justice. However, if the shocking conduct depicted is in fact legal and permitted under Namibia's laws, I call for urgent amendments to the Nature Conservation Ordinance, and other relevant laws and regulations, to ensure that:

a) cruel killing methods such as trapping, poisoning, hunting with dogs, bludgeoning, or those that otherwise cause unnecessary suffering, are outlawed.
b) robust procedures are put in place and enforced to ensure that animals targeted as "problem-causing" are a genuine and proven threat to human or animal life.
c) all alternative means of non-lethal mitigation are first considered prior to lethal measures, which should only serve as a last resort.
d) if killing is deemed absolutely necessary, the method must be humane and without the use of trapping, poisoning, dogs, use of blunt force, or methods that otherwise cause unnecessary suffering.

Thank you for your urgent attention to this matter,