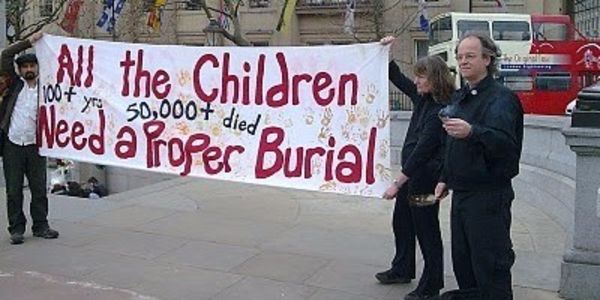 Stop and Defund the Genocidal Churches of Canada!

The Roman Catholic, Anglican and United Church of Canada are guilty of genocide, child rape, trafficking and killing, and money laundering for organized crime. Between them they killed more than 60,000 indigenous children in their "residential schools". These churches should not be taxpayer supported or receive any form of public funding, lest we collude in their crimes. We can stop their ongoing torture and murder of children by pulling the financial plug on their crimes today! (See www.murderbydecree.com)

of the Roman Catholic, Anglican and United Church of Canada

LET IT BE KNOWN that We the People have become aware that the Corporations known as the Roman Catholic Church, the Anglican Church of Canada and the United Church of Canada (herein called "the Churches") have been and are engaged in activities and pursuing policies within Canada that disqualify them from receiving tax exempt charitable status under the laws of our Nation, and that constitute a Criminal Conspiracy under said laws and International Law, by engaging in the following:

It is clear that the Churches are not only actively violating the statutory terms and conditions under which they are exempt from paying taxes in Canada but in so doing are systematically furthering criminal activity and treason in our Nation at the behest of a foreign Power. The Churches are doing so with the apparent compliance and collusion of the Department and Minister of National Revenue and the Canada Revenue Agency, who objectively can be considered to be accomplices in this Criminal Conspiracy.

Further, this Conspiracy by Church and State is subverting domestic laws by forcing all tax paying Canadians to assist in the establishment of the criminal works of the Churches in Canada, including through the channeling of Canadian tax revenue to the financial arm of a foreign Power, namely the Vatican Bank, by means of secret "Financial Concordat" agreements, without the knowledge or consent of the public.

THEREFORE, in accordance with the Constitution and the Laws of Canada, and according to the Duty and Necessity of lawful action by the Public and the Government, We the Undersigned citizens of Canada do hereby petition and demand of the Minister of National Revenue and the Canada Revenue Agency the following:

BE ADVISED BY THIS PETITION AND PUBLIC NOTICE that any failure by your agencies to act upon this Petition and the Laws and Constitution of Canada will compel We the People to take direct action to non-violently prevent the revenue-collection operations of the Churches as Transnational Criminal Organizations, as we are compelled to do under domestic and International Law and by the dictates of our Reason and Conscience according to Necessity.

Copies of this Petition and Notice have been issued to the federal Justice Department, the RCMP and the Canadian Security Intelligence Service, Members of Parliament and the Senate, and the Prime Minister's Office.

Care2
Stop and Defund the Genocidal Churches of Canada!
SHARETWEET