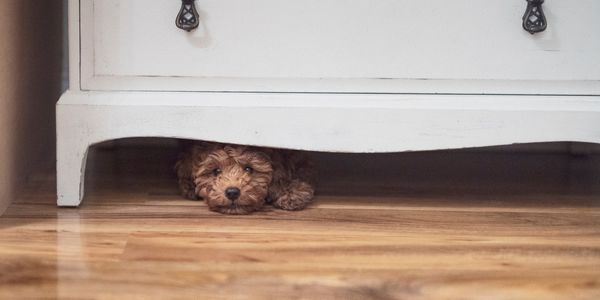 Fireworks Literally Scared Dexter the Dog to Death! We Cannot Let This Continue!

Bonfire Night in the United Kingdom is meant to be a celebration, but for many it's an absolute nightmare. That's because the autumn holiday, which falls on the 5th of November each year, is not only punctuated by warm, glowing, friendly bonfires -- it's a night when nefarious explosions and bomb-like bursts fill the air, terrifying pets, wildlife, and vulnerable people alike.

They're fireworks, but to family pets like Dexter the dog, they might as well be the end of the world.

Dexter was in North Yorkshire with his loving family, one he had been a part of for all of his 10 years, when the explosions began. The sweet mutt trembled and shook in fear, and fled to the bathroom, desperate for safety and escape. When his owners went in to comfort him, he was dead, most likely sent into cardiac arrest from utter fear.

Dexter is one of countless innocent beings who are terrorized every year in the United Kingdom. Sign if you want to see an end to the terror -- demand Parliament pass laws restricting firework sales to local councils running licensed, official events!

The stories came pouring in after this year's Bonfire Night from heartbroken and distressed pet owners. A puppy named Ollie passed away in Northern Ireland after being sent into a fit of seizures from a nearby firework display. Another pup named Bam was so terrified by the loud explosions that he plunged into the sea off the coast of Kent. Bam swam for 10 miles in a petrified fervor before he finally resurfaced; it is a miracle he survived such a grueling ordeal, and that he was reunited with his owners.

These are just three of the countless incidents that happen because of the lax regulations around fireworks in the UK, and the demand for them around Bonfire Night. Currently, anyone over 18 can legally purchase the literal explosives and can set them off any time between 7am and 11pm year round, and even later on holidays like Bonfire Night! It's illegal to set them off in streets and public places, but being on one's own property doesn't stop the massive bangs from reverberating into homes for miles and blinding lights from filling the entire sky.

This complete free-for-all means that pet owners have no way to prepare themselves or their beloved companions for a fireworks display. The precautions they could take -- like retreating to an insulated room, playing music or white noise, and providing distractions -- are completely useless if you have no idea when the next explosion might be. Ollie, the puppy who died in Ireland, wasn't even killed on Bonfire Night -- it was a few days before! His owner, who knew Ollie suffered from epilepsy, had no chance to save the poor thing.

Studies show that well over 50% of all dogs, cats, and horses show signs of distress during fireworks displays. How can we still be okay with celebrating this way?

Fireworks don't just affect pets, either. Wildlife and vulnerable people, like those who suffer from PTSD, sensory sensitivities, or impairments like dementia suffer immensely from fireworks displays. Allowing any member of the public to set them off basically whenever, wherever with no warning is totally unacceptable!

Sign the petition if you want this to be the last Bonfire Night with mass pet casualties! Demand stricter regulations on fireworks sales in the UK.