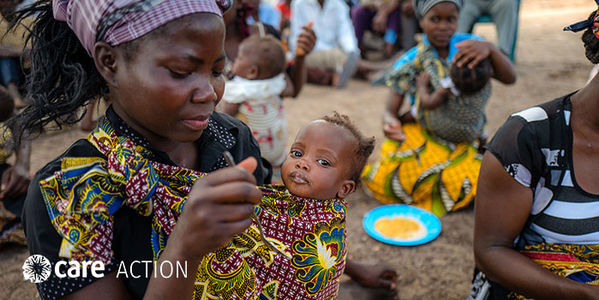 Sign The Petition to End Global Hunger and Malnutrition

Time is of the essence. As 768 million people worldwide face hunger and malnutrition, legislation that would help feed the world will soon expire in U.S. Congress, leaving millions without reliable access to food.

We cannot let this happen. Urge your members of Congress to act now and ensure the U.S. keeps its commitment to fighting hunger around the world.

We have the solutions to end this "hunger pandemic" triggered by conflict, climate change, and the spread of COVID-19, but U.S. Congress must act now to ensure the most vulnerable communities — particularly women and children — have reliable access to nutritious food and that small-scale farmers are empowered to transform food systems.

Add your name now to fight global hunger and malnutrition.

I am joining with CARE Action advocates to urge you to help fight food insecurity and malnutrition around the world, especially as crises like COVID-19 and the war in Ukraine dramatically worsen the current global hunger crisis.

Right now, approximately 768 million people worldwide are undernourished or chronically hungry. This number has increased drastically in the past year due to the impacts of COVID-19, which has triggered a secondary "hunger pandemic" and caused an alarming spike in the number of malnourished people around the globe. And in times of strain, women and girls often eat last and least, despite being the majority of food producers globally. We need to act now to ensure the most vulnerable communities — particularly women and children — have reliable access to nutritious food and that small-scale farmers are empowered to transform food systems that have long perpetuated inequities.

Feed the Future, the flagship U.S. food security program launched in 2010, has helped lift more than 23 million people out of poverty and improved food security for millions. The original Global Food Security Act (GFSA) passed in 2016 authorized Feed the Future and called for development of the Global Food Security Strategy, a comprehensive plan that coordinates effective and sustainable programming to tackle hunger, poverty, and build on what we know works, including investments in women and small-scale farmers.

GFSA improved U.S. government global food security programming by instituting a comprehensive and coordinated U.S. strategy that focuses on empowering local communities to address hunger, and we have seen truly amazing results. These include a 32 percent increase in maize production in Zambia, $146 million in new income earned by farmers in Bangladesh, and a nine percent reduction in child stunting in Ethiopia.

Despite Feed the Future's successes, ongoing food insecurity around the world makes the program's work more urgent than ever. All our progress toward improving global food security through Feed the Future will be jeopardized if the Global Food Security Act is not reauthorized before its expiration in 2023.