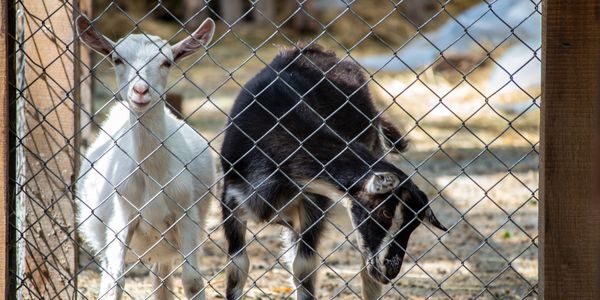 Goat's milk is rising in popularity in the United Kingdom, partly because it is being marketed as a healthy, sustainable, and ethical alternative to cow's milk, which is clearly none of those things. But a new undercover investigation by the Animal Justice Project has shed light on the horrific conditions and instances of animal abuse at a major goat milk brand, Delamere Dairy. UK regulators must look into these reports and protect the poor goats at this farm!

Delamere Dairy is a miserable non-grazing farm, where animals spend their entire (short) lives trapped in filthy sheds without any enrichment. Despite being surrounded by luscious green fields -- and giving the illusion of the animals' ability to spend time on the pasture -- the goats do not leave their pens. They can only look outdoors and wish to roam free. This also means that goats are not allowed to display their natural behaviors, browsing for weeds and bushes as they usually would.

To make matters worse, goats at Delamere Dairy suffer from unrelenting breeding process from which their milk is harvested, meaning nanny goats are milked raw. They have sore udders, unnaturally large pregnancies, and some pregnant goats were literally immobile. The investigation found that one goat was completely unable to stand up for over 28 hours total because she was crushed by her own unnaturally large body weight.

And perhaps the most horrific of all -- the undercover footage taken by this amazing organization caught the "Spring massacre," during which tiny baby goats were slaughtered in front of their mothers. Since the milk is what these farms are after, they find no reason to show mercy or compassion to the babies that were necessary to produce that milk. Squirming and writhing in pain, some of the kids were left to die slowly and painfully. These practices are absolutely abhorrent.

Consumers deserve the truth about the products they are buying, and there must be a formal investigation into Delamere Dairy. Sign now to tell the UK Department for Environment, Food & Rural Affairs: protect innocent goats from terrible living conditions! Investigate Delamere Dairy for abuse now!