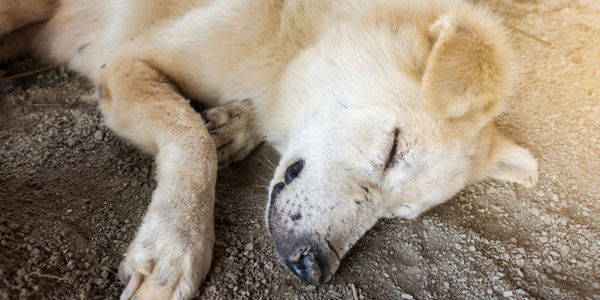 There Were Dead Dogs in Her Car, Home, Yard, and Trash Cans. Demand an Investigation Now!

Authorities in New York state recently discovered that a woman was raising her young son in a home filled with dead dogs.

They might never have known, except that the situation had gotten so bad, other people could smell the rotting animals from a distance of 20-30 yards. While child protective services spoke to her 8-year-old child, he allegedly asked to stop living with her because the situation had gotten so bad. Officials who examined the property wrote in their reports that the woman's home "did not appear to be suitable for living -- let alone a child."

But the worst part is: apparently the woman has a long history of harming animals. Yet somehow she was still able to acquire - and hurt - multiple more.

Authorities and other witnesses said the home "smelled of death," with blood, urine, and feces deposited all around the house and even smeared on the walls. Officials found dead dogs scattered all over the place. One was in a trash can. Some were inside the house. And still others were left outside to decay.

Yet another dog wasn't on the property at all. Its dead carcass was locked in a cage inside her car. The same car she allegedly used to transport her son around.

This would be illegal - and immoral - under any circumstances. But this particular individual had already been banned from owning or living with any pets. That's because, the previous year, a neighbor noticed something odd about a trash bag outside the house. Sticking out of the bag was the paw of another dead dog.

When authorities came to the property this most recent time, the woman feigned surprise at the fact that her home and property were filled with dead dogs. Apparently she claimed she'd had no idea - and blamed it on her lack of smell from COVID. But smell shouldn't tell you to check on your animals, feed them, care for them, and generally keep them alive. You shouldn't have to smell your dogs in order to not kill them or neglect them to death.

Authorities should investigate where this woman went to get these additional animals - animals which are now all dead. It's imperative that pet retailers do not sell animals to criminal animal abusers ever again!
Sign Petition
SHAREShare With FriendsTWEETEMAILEMBED
Sign Petition
See more petitions:
You have JavaScript disabled. Without it, our site might not function properly.

Care2
There Were Dead Dogs in Her Car, Home, Yard, and Trash Cans. Demand an Investigation Now!
SHARETWEET