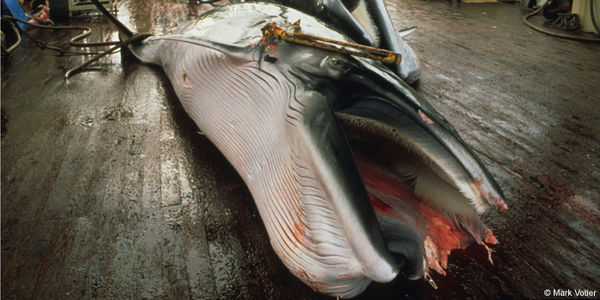 You can make Japanese whaling a deal breaker

Japan has been defending its right to whale in the face of almost universal condemnation. We now have an opportunity to exert pressure on Japan that they simply cannot afford to ignore – economic pressure.

Japan and the EU are currently negotiating a free trade agreement, worth billions of yen and euros. The EU Parliament has the power to say 'no' to the agreement if Japan continues to hunt whales.

Please sign our petition – the EU Parliament will be voting on your behalf.

Japan has been blatant in its drive to continue whaling; exempting itself from the International Court of Justice ruling that its whaling is illegal, and declaring it will increase its hunt to 333 minke whales a year for 12 years – that's the slaughter of 3,996 whales!

Take action today and ask the EU Parliament to say 'no' to a new trade agreement until the whaling stops.

Dear President Schulz and all Members of the European Parliament,

The European Union and Japan are currently negotiating the terms of a free trade agreement. In 2012, the EU Parliament noted in its "Resolution on EU trade negotiations with Japan" that "serious divergences remain between the EU and Japan on issues related to the management of fisheries and whaling notably Japan's whaling under the guise of scientific whaling, and calls for broader discussions on the matter of the abolition of whale hunting and of trade in whale products."

In March 2014, the International Court of Justice (ICJ) ruled that Japan should immediately rescind its unilateral Antarctic special permit (so-called ''scientific") whaling since Japan's Antarctic whaling did not qualify as such, and therefore as a consequence, Japan was in contravention of the International Whaling Commission (IWC) moratorium on commercial whaling.

However, in October 2015, Japan declared that it would reject any future jurisdiction of the ICJ over its scientific whaling.  In November 2015, Japan announced that it would resume Antarctic whaling under its new programme, "NEWREP-A", despite the judgment of the International Court of Justice and strong scientific opposition. The fleet left port on December 1st and is currently in Antarctica, intent upon killing 333 Minke whales.

According to the latest IWC resolution on scientific whaling, which was adopted in 2014, no further special permits for whaling under existing or new research programmes may be issued before the IWC Scientific Committee has confirmed that they are compatible with the IWC Convention. This confirmation is lacking for the new Japanese research programme, NEWREP-A. Moreover, in June 2015, the IWC Scientific Committee concluded that NEWREP-A does not meet the requirements of the IWC Convention for scientific whaling, since no convincing justification for the use of lethal methods was given.

Japan has time and time again shown that it is willing to disregard science, international law, and international cooperation when it comes to its whaling operations.

The European Union has strong policies against commercial and scientific whaling. Over the last decade, it has repeatedly stated its concerns with respect to Japan´s so-called "scientific" whaling programmes. Indeed, as recently as December 2015, the EU signed on to a demarche, strongly condemning Japan´s plan to continue its so-called "research" whaling in the Southern Ocean.

What the whales need now is more than just diplomatic protest. The European Parliament, through its role within the European Union, is in a strong position to call on the EU to make a stand for the whales by applying economic pressure during the current negotiations on the EU - Japan free trade agreement.

-                I therefore urge the European Parliament to call upon the EU Commission to make Japan´s continued flouting of the international moratorium on the hunting of whales (under the guise of scientific research), a central subject in the negotiations and to reaffirm the EU´s stance against commercial and scientific whaling.

-                I also strongly urge the European Parliament not to agree to a free trade agreement between the EU and Japan, as long as the Japanese Government continues to sanction whaling and refuses to adhere to its international obligations.

I believe that, by taking such a positive stand, the European Parliament can help end Japan´s whaling once and for all.  I urge you to act now and show the Japanese Government that whaling poses a very real threat to their country's   international relations and economic growth.  Please also emphasize the immense disservice the Japanese Government is doing to its people by clinging onto this outdated, cruel and unnecessary practice.

Care2
You can make Japanese whaling a deal breaker
SHARETWEET