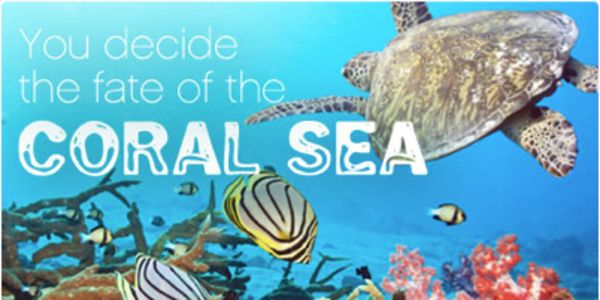 The Australian government is now deciding the fate of the Coral Sea.

The government's draft plan for this iconic area would exclude the majority of species-rich coral reefs and important breeding sites for tuna and marlin leaving them exposed to destructive or extractive activities.

In fact, under the current proposal, many of the jewels in the crown of the Coral Sea remain vulnerable: Only two of about 25 unprotected reefs would be given a high level of protection.

You can make a difference: Ask the Australian government to protect all of the reefs and breeding areas in one very large Coral Sea marine national park.

Make your voice heard through a rapid submission on the Coral Sea marine plan to the federal environment minister, Tony Burke, with a copy to your federal MP if you live in Australia.
read petition letter ▾
Dear Environment Minister Tony Burke:

Right now you are deciding the fate of Australia's Coral Sea. Your Department's draft Coral Sea bioregional marine plan is a good start, but it falls far short of protecting the area's fragile coral reefs and spectacular marine life.

The western Coral Sea contains most of the species-rich coral reefs and critical spawning sites for black marlin and threatened tuna. Under the current proposal, many of the jewels in the crown of the Coral Sea remain unprotected: Only two of about 25 unprotected reefs are given a high level of protection.

I therefore urge you to extend the proposed marine national park boundary to include the western Coral Sea. This expanded national park zone should include:

* Osprey and Shark reefs, which have high densities of sharks and unique species, such as the Osprey nautilus. Osprey is one of the top 10 shark dive sites in the world.

* All the coral reefs of the Queensland Plateau, which provide important habitats for corals, herbivorous fish, green turtles, sharks , seabirds, and hundreds of threatened species.

Marion Reef and the Marion Plateau, which contain important reefs, cays, and herbivorous fish. The drop-off at the edge of the plateau is habitat for large ocean fish such as tuna as well as many species of whales.

* The underwater volcanoes in the southern Coral Sea that are home to a rich array of marine life, including whales, sharks, tuna, and other ocean predators.

By extending the proposed marine national park to include the western half of the Coral Sea, you could create the world's largest marine national park. This park would have minimal socioeconomic impact. The short-term cost of ending fishing would be far outweighed by the long-term conservation, scientific, and tourism benefits to Australia and the world.

The Coral Sea is also of great historical significance. In May 1942, it was the site of the Battle of the Coral Sea, and many shipwrecks can be found on its scattered and diverse reefs.

Minister Burke, you have a rare opportunity to create a lasting ocean legacy and demonstrate global leadership in ocean conservation. Protecting special places in our oceans such as the Coral Sea would deliver long-term benefits for us all now and for the generations that follow us.

Please count this as my submission to the draft Coral Sea bioregional marine plan. I thank you for taking the time to consider it.