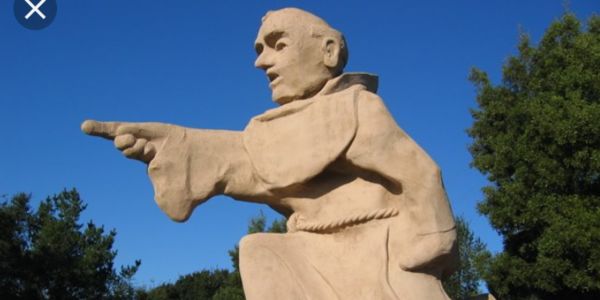 Demand for the removal of the Father Junipero Serra statue located at the rest stop vista in San Mateo, California

From the time of his arrival in California to the time of his death, Father Junipero Serra was responsible for the brutal enslavement, forceful assimilation and genocide of hundreds of thousands of Native People belonging to tribes ranging from Baja to north of San Francisco Bay.

Painted as "The Father of Missions" and romanticized as the bringer of prosperity through farming and religion, these titles do little to erase public record and the numerous accounts of atrocities he and his campaign of indoctrination have caused the Indigenous Peoples of this land.

This is a petition and call to action for the removal of the Father Junipero Serra statue currently occupying the rest stop vista on Highway 280 in San Mateo, California.

In a Yelp review of the late Alfredo Ruffino's "Artistic Contribution," his own Wife states that it was odd that he was hired to make this statue as his business was stucco contracting and not sculpting, which became even more apparent when he had to outsource the face to an employee whos skill set only enabled him to produce a likingness of himself and not that of the Infamous Friar, thus resulting in an ill formed, and uncharacteristic statue that has repeatedly been referred to as looking as though it had been made from "lumpy mashed potatoes."

This offensive statue is a constant reminder of the crimes against humanity that Father Junipero Serra committed against Native People, and if we want to move forward as a society, we must have the courage to acknowledge that statues like these are problematic and will only continue to be oppressive until they are removed.

PLEASE TAKE A STAND AGAINST THE CONTINUED OPPRESSION OF THE NATIVE PEOPLES OF THIS LAND AND SIGN FOR THE REMOVAL OF THIS STATUE!

Care2
Demand for the removal of the Father Junipero Serra statue located at the rest stop vista in San Mateo, California
SHARETWEET