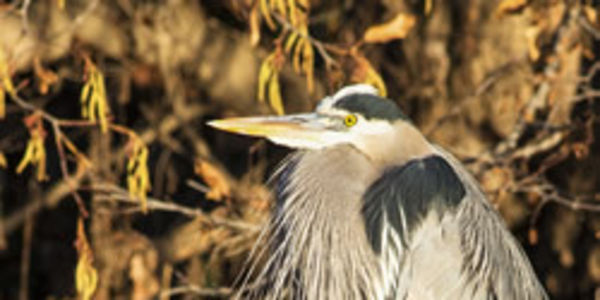 Until early May, Oakland's gritty downtown provided a habitat for an imperiled & wondrously raucous avian resident: Highly social and extremely vocal, black-crowned night herons (or night ravens) are nocturnal, quite stout & can grow up to 2 feet tall. And they oddly like to hang out in Oakland where neighboring human residents quite enjoyed them.

But then the Oakland Post Office decided that their trucks, parked underneath trees used as habitat and nesting cradle by the herons, should not have to bear the brunt of the birds' metabolic activities. Rather than putting up a tarp, parking their trucks elsewhere, or just handing something back to nature for a few months while the birds are nesting, they hired a 3rd party crew called Campos Tree Service to do a quick job. And they did.

Campos Tree Service cut into those trees and cut those birds down and then fed all they'd cut – leaves & branches & blood & feathers – through a wood chipper. That's what witnesses saw. When neighbors and police finally stopped them the crew claimed they knew nothing about any birds – though their sawing sent "nests and chicks toppling 25 feet down to the ground before they were then fed to the wood chipper, witnesses said" (cf. San Francisco Chronicle, http://www.sfchronicle.com/bayarea/article/Shorebird-wood-chipper-massacre-reported-in-5458395.php#/0).

Would that the birds had known nothing about Campos Tree Service! Or the Oakland Post Office for that matter, which pushed for a trim job during nesting time, an activity explicitly advised against by bird conservationists.

Update: By now there's a backlash. Suddenly there's compassion for the tree trimmer and the birds fade into the background. What did witnesses see? What's the ratio of rescued birds (5) to perceived destroyed nests (in the 20s)? What does it do to a nestling to take it out of its nest and set it on the ground next to the postal trucks? Is the tree trimmer a scapegoat for USPO-Oakland's misdeeds? What's this petition about now that it's first goal was accomplished and after it was already closed by its author? It might be about getting the USPO-Oakland to accept responsibility and change its neat-freakish, ornithocidal ways. But local California politicians are already looking into that. Funny, Darrel Issa also got into the fray and wants to free the trimmer from his charges. So now the issue has become political, i.e. party-political. All of this obscures what is the issue: Were birds harmed and killed in Oakland? Was their habitat illegally destroyed? And parenthetically, are Oakland witnesses not to be trusted? The State has not yet concluded its investigation. Let's see what they find out. I am closing this petition now - for the second time.