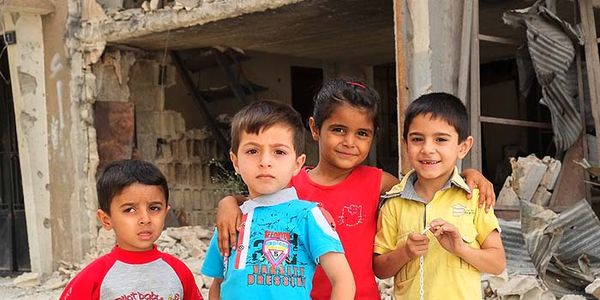 Email your MP: Tell them to stand against British military escalation in Syria.

After the tragic events in Paris, our Tory Government wants to be seen to be taking urgent and aggressive action against ISIS. Despite being defeated on the issue in Parliament in 2013 they are pushing for another vote on military escalation in Syria.

Action is indeed needed to bring down the terrorist organisation that is ISIS, but bombing Syria will only increase the violence, chaos and suffering of civilians there. It will also lead to an increase in the number of people fleeing the already war-torn country.

Britain has been the most aggressive country in Europe over the last fifteen years, leading military interventions in Afghanistan, Iraq and Libya. Yet it has done little to help the victims of the wars it so enthusiastically pursues and it has been at the forefront of opposing a humane policy towards refugees.

Another destructive bombing campaign is no solution whatsoever. It will make moves toward a political solution harder. It risks intensifying and widening what is already a catastophic war.

Tell your MP to stand against further military escalation in Syria and prevent another disastrous intervention. Sign this petition now to send them the email below.

I am writing to ask you to oppose any bombing or military escalation in Syria. The Prime Minister is trying to win support for such a vote in Parliament, but such military intervention would be completely wrong and counter-productive.

The disastrous situation in Syria is the result of a civil war, in which a number of different states and forces are involved. Millions have been displaced and made refugees. David Cameron is trying to use the refugee crisis as a pretext for more war, but wars that previously involved the British government have been instrumental in helping to destabilise the Middle East and parts of South Asia and Africa. These regions are now producing refugees on a massive scale, because of the legacy of war.

In 2011 the government launched the bombing of Libya. The country is today wracked by civil war, and is the source of both terrorism and large numbers of refugees. The fact that Russia is now militarily involved in Syria makes any Western escalation even more perilous.

Two years ago, Cameron lost a House of Commons vote to bomb Syria. Then he wanted to bomb Assad’s forces, but today he wants to bomb ISIS. The truth is that further bombing will do nothing to help the people of Syria, or the bring peace. ISIS is a product of war, and has been helped to grow by Western allies such as Turkey and Saudi Arabia.

Alternative non-military solutions such as economic sanctions on countries and banks funding ISIS should be used.

It is important that we learn from history. It is now widely accepted that Western interventions in Afghanistan, Iraq and Libya have had disastrous consequences. There is no reason to think that Syria will be any different. As my MP I ask you to stand against military escalation.

Please reply to let me know how you intend to vote on military escalation in Syria if there is such a vote in Parliament.

[Your name, address and email]

Care2
Email your MP: Tell them to stand against British military escalation in Syria.
SHARETWEET