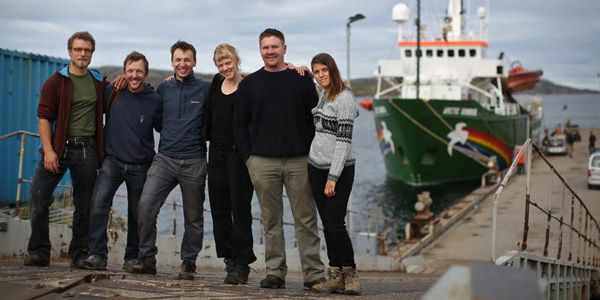 **Update: 28 Greenpeace activists, a freelance photographer and a freelance videographer have been charged with Houliganism in Russian Courts. This is the same charge that was used to jail the Pussy Riot protesters. The charge carries with it a maximum sentence of 7 years in a Russian prison.

The Arctic 30 were on the scene of a peaceful protest at an off-shore oil platform owned by Russian oil giant Gazprom. When they arrived, the Russian Coast Guard fired warning shots and threatened the activists' lives. Then, Russian Coast Guard officers illegally boarded and seized the Greenpeace ship Arctic Sunrise via helicopter.

Peaceful activism is vital when governments fail to respond to catastrophic climate change, and this disproportionate response is purely to intimidate people who stand up to companies and countries that are causing global warming.

Please join our activists in becoming an Arctic Defender. Sign our petition to Russia’s US ambassador demanding Russia release the activists, the immediate withdrawal of the Russian Coast Guard from the Greenpeace ship, and an end to offshore oil drilling in the Arctic for good.
read petition letter ▾
Dear Ambassador Sergey Kislyak ,

I am writing to you with a request for your attention and action.

As you may know, 28 Greenpeace activists (as well as a freelance photographer and a freelance videographer) were arrested after a peaceful protest at Gazprom's drilling platform Prirazlomnaya on September 18th.

Two of the activists tried to climb the side of the platform and attempted to stage a safe, peaceful protest. More than 24 hours later, Russian security services descended from a helicopter onto the deck of the Greenpeace ship Arctic Sunrise, seized the ship at gunpoint and detained the crew. This took place outside Russia's territorial waters.

These activists and freelancers are now being held in detention centers in and around Murmansk. I am very concerned by the response of Russian authorities. The charge of piracy, which carries a maximum 15 year sentence, is disproportionate. Yet this is the charges our activists face.

You have an important voice in this matter. Please use your position to promote fairness and reason.

The activists were protesting at the Prirazalomnaya for purely unselfish reasons. As the ice is retreating, oil companies are moving north to drill for the fuels that are causing the ice to melt. The activists were acting out of a deeply held conviction that this is a risky enterprise, when an oil spill would be catastrophic for the entire region. They should not be charged with such a serious crime as piracy for taking peaceful, safe action to protest the dangerous industrialization of the Arctic.

Amnesty International, Human Rights Watch and Nobel peace prize winner Adolfo Pérez Esquivel have joined hundreds of thousands of people across the globe calling for the release of the Arctic 30.

I am writing to add my voice.

I am asking for your help.

Please join me in calling for:

Piracy charges to be dropped and the immediate release of the 28 activists and two freelancers who have been detained by Russian authorities in Murmansk.

A commitment that the activists and freelancers will have access to full legal representation of their own choice, as well as consular services, translators, and human rights inspectors.

An investigation into the destructive and secretive activities of oil companies in the Arctic, and a ban on offshore oil drilling in the region.

I urge you to relay these requests to the Russian government in Moscow immediately. Please join me in calling for the swift release of the Arctic 30.

Sincerely,
[Your name here]
Sign Petition
SHAREShare this petition with friends!TWEETEMAILEMBED
Sign Petition
See more petitions:
You have JavaScript disabled. Without it, our site might not function properly.