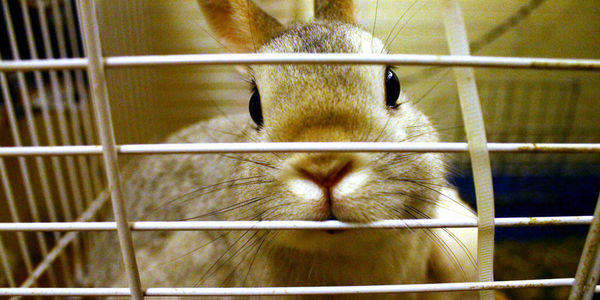 Sadly, rabbits are one of the most neglected domestic animals. Animal rescue centres are overflowing with unwanted pet rabbits which are desperate for a loving home. A new commercial rabbit breeding facility is a terrible idea.

"Hundreds of thousands of rabbits face an unhappy, lonely existence in cramped accommodation, whilst being fed an inappropriate diet and suffering from a range of painful diseases." PDSA Senior Veterinary Surgeon Sean Wensley

Selling rabbits and other small animals in pet shops encourages impulse buying. There are too many opportunities for the animals to end up in the wrong hands by being purchased for cruel reasons, or simply by people ignorant to the rabbits' needs. A good rescue centre would do a home visit to see if the person's home is suitable to adopt an animal.

67,000 rabbits are given to rescue centres every year in the UK, and many more are abandoned into the wild leading to almost certain death or given up to vets for euthanasia.

Despite this, Glen Bruce, who already runs a pet breeding business, has applied for planning permission for a pet rabbit breeding facility in Lincolnshire. He says, "We are breeding pets, and that includes guinea pigs, hamsters and rabbits".

I was a Rehoming Co-ordinator for a local animal rescue centre so I know that rescues are inundated with unwanted rabbits - the county does not need a pet breeding facility to make matters worse. Please sign my petition against the application for a unit to breed pet rabbits in Crowland, Lincolnshire.

I have just closed my previous petition “Refuse application for proposed rabbit breeding unit in Crowland”. The reason for this petition was that I thought the rabbits were being bred for medical research. It appears this is not the case and the rabbits are being bred for the pet trade; together with guinea pigs and hamsters.  STILL NOT ACCEPTABLE!!

Mr Bruce Allens of Bridge Farm, Throckenholt, Spalding, Lincs has put in an application to South Holland District Council to build an establishment for the breeding of rabbits for the pet trade on land off Whale Drove, Crowland, Spalding, Lincs PE12 0UB. The planning application can be viewed/commented on here

“We are animal lovers …

"Our idea is that people would be able to see the animals on a webcam (via the pet shop) before they buy them and then be able to pick them up from us.”

“Despite being the UK’s third most popular pet, with an estimated 1.6 million currently kept, the welfare needs of domestic rabbits are widely misunderstood by their owners,” said PDSA Senior Veterinary Surgeon Sean Wensley.

The maximum life span of a rabbit is approximately 12 years, but generally small breeds live longer than giant breeds. People often see rabbits as children’s pets without considering a child may lose interest within a few years.

Rabbits reach sexual maturity between 3 and 6 months of age. After a rabbit has given birth, if the male is still present, she can and most likely will become pregnant within 24 hours of giving birth.

RWAF veterinary expert advisor Richard Saunders said: “What is really worrying is that this number only reflects the cases where the rabbits have made it into rescue. We can’t possibly quantify how many more are dumped in the wild and left to fend for themselves, which leads to almost certain death.

“Then there are those who, when the novelty has worn off, are simply neglected and left often in a hutch with no access to exercise space and almost no attention except for a handful of food now and again.”

The Rabbit Welfare Association & Fund (RWAF) also points out that countless unwanted pet rabbits are sold for next to nothing through classified ads both in newspapers and online as well as at livestock auctions. It is understood that many of these are bought as meat.

Some of these unwanted rabbits

Pet cruelty: Too many of Britain's rabbits have a miserable life, warn vets (12 May 2015)

Plea for help over rise in abandoned rabbits (21Jul 2016)