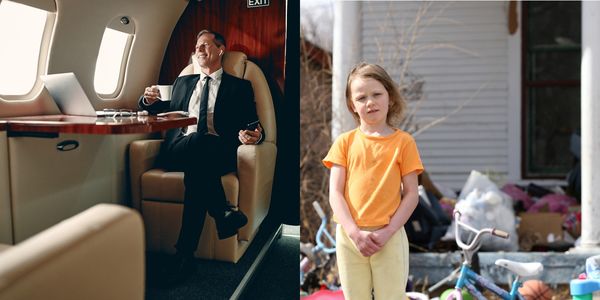 The Pandemic Made the World's Richest Richer, While Over 250 Million People Are Being Plunged Into Extreme Poverty!

While the vast majority of people on earth have suffered devastating economic losses in the past few years – from the impacts of the pandemic, to Russia's invasion of Ukraine, to skyrocketing inflation -- a handful of the world's wealthiest are profiting handsomely. In fact, a whopping 573 new billionaires were added to the total tally over the course of the past two years. And while the world's ultra-rich continue to rake in more profits than the average person could possibly imagine, 263 million people will likely be pushed into extreme poverty this year, meaning they'll live on less than $2 USD per day.

Sign now to join Oxfam in calling for raising taxes on the planet's billionaires!

Billionaires' cumulative wealth rose by a jaw-dropping 30% during the pandemic. And now, they're celebrating these gains at their lavish World Economic Forum in the Swiss Alps. The Davos Forum is notoriously over-the-top, and every year the world's wealthiest attend the conference to wax poetic about their commitment to addressing the planet's most pressing crises, whether that be climate change or the global wealth gap. Yet the number of billionaires continues to increase while the world's poorest -- already fighting daily to survive -- slip even further into the margins. When will these billionaires who allegedly care so much about human suffering finally do something about it? The reality is, we cannot rely on billionaires to solve these problems on their own, because they won't. We must increase taxes on their income.

The cumulative wealth of billionaires rose from $3.8 trillion -- a number already so high that most of us cannot imagine what it actually equates to – to $12.7 trillion in just over two years. These billionaires are so wealthy that they could never work another day for the rest of their lives and still live out the most luxurious life imaginable. There is no reason countries participating in the World Economic Forum can't raise taxes on the wealthiest members of their society to benefit the poorest. In fact, in the United States, a lot of the wealthiest Americans actually pay less in taxes than the average person. Billionaires could not become billionaires without the people who work for them and buy their products. It's time they started acting like it.

These numbers are chilling, but they can change. We must heed Oxfam's call and push all countries participating in the World Economic Forum to raise taxes on billionaires in order to take care of people living in extreme poverty, making less than $2 per day. Sign the petition now if you agree!

Care2
The Pandemic Made the World's Richest Richer, While Over 250 Million People Are Being Plunged Into Extreme Poverty!
SHARETWEET