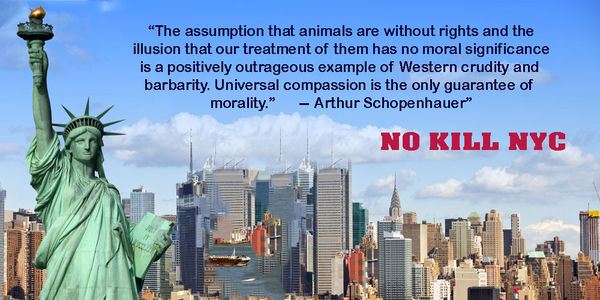 Petition in support of new bill to remove DOH control from the NYC AC&C, to reform it, and to make the shelter system a no-kill entity.

A new bill is being considered by the Legislature to compel reform of the New York City Animal Care and Control (“NYC AC&C”), a high kill shelter system serving the metro-NYC area. We are appealing to members of the public to support the bill and demand that NYC AC&C become a no-kill shelter. You can do this by signing and sharing far and wide the below petition. The more signatures we obtain, the more support will be garnered for the bill, which will increase the chances of it being passed. A summary of the problems with and mismanagement of NYC AC&C and the proposed reforms are discussed below.

In early 2013 Stringer released a groundbreaking "Led Astray" Report on reforming the ACC.

The need for shelter reform at NYC AC&C, which encompasses the Manhattan, Brooklyn, and Staten Island care centers, has long been a topic of discussion among downstate New Yorkers and the animal rescue community. In fact, the plight of these shelter animals has reached well beyond the borders of the New York City area, but despite the public outcry and pleas for reform, no concrete action has ever been taken to improve the shelter conditions and the adoption rate of these animals- until now. Despite being referred to as “care centers”, animal care and welfare is simply not a priority at NYC AC&C.

And a year later, soon after being sworn in as NYC's Comptroller, Stringer began an audit of the AC&C. Thus, it wasn't surprising that release of that audit sparked a tsunami of news coverage.

The New York State Department of Health (“DOH”) governs and manages the NYC AC&C, which presents a conflict of interest and is inexplicable given that the DOH’s priority is protecting human health and not animal welfare. The DOH has created an oppressive, unhealthy, and deplorable environment for the NYC AC&C animals, emphasizing animal control over animal care. Euthanasia of healthy, adoptable animals is rampant at the NYC AC&C, and the kill rate has only increased over the years. Many animals are put down for no other reason than catching very treatable shelter-borne infections which respond fully to a course of antibiotics. More often than not, any given animal entering NYC AC&C will not come out alive but instead will be summarily put to sleep. A shelter should be a temporary stop to a life and home and not a death sentence simply because an animal finds itself homeless.

The entire burden of saving and finding homes for these animals has shifted completely to the approved rescue groups, which are overburdened and lack the space and resources to save them all. In fact, even with rescue assistance, only a fraction of the shelter animals are spared euthanasia. NYC AC&C is also prone to incompetence and making errors in situations where animals have rescue interest and/or “holds” placed on them. Such errors often cost them their lives and are wholly unacceptable.

If passed, the bill would remove DOH control over NYC AC&C, thereby paving the way for significant reform and a no-kill shelter. In order to realize the no-kill goal, a number of changes and reforms (which are being proposed in the new bill) must occur including:

• adopting more sanitary measures and isolation practices to curb the incidence of kennel cough and upper respiratory infection (“URI”) among the shelter animals.

• affording members of the public and rescue organizations longer periods of time to find placements for animals slated for euthanasia.

• providing full service veterinary care to the shelter animals, thereby alleviating unnecessary suffering in the case of critically injured and/or ill animals and improving the adoption chances of all animals.

• opening additional full-service care centers in the historically underserved boroughs of the Bronx and Queens, which would serve to ease the high animal volume at the existing shelters.

• offering one day a month free or low-cost spay/neutering at any given care center to reduce the number of animals entering the shelter.

• barring feral or “community cats” from entering the shelter system to face a certain death and instead requiring trap and release for all feral cats in the region.

• implementing an extensive animal foster care program, initiated by the shelter and/or in conjunction with the rescue groups.

• having community involvement and enlisting volunteers to promote the no-kill goal both within and outside of the shelter.

• promoting pet retention with rehabilitative and preventive programs designed to assist pet owners in keeping their animals rather than surrendering them to NYC AC&C.

• putting more effort into reuniting lost pets with their owners and

• installing a compassionate shelter director who values animal life and welfare, who will strive to reduce the euthanasia rate, and who embraces the no-kill goal.

All of these reforms and changes are being proposed in the new bill. We are optimistic that the passage of this bill will bring about positive change for the good of NYC’s shelter animals.

As taxpaying citizens and as a society we owe no less to the innocent victims of NYC shelters and as decent people of conscience we seek to have NYC shelters become no-kill now, not after one million animals are senselessly murdered.

Animal shelters in other major cities have worked hard to achieve no kill status. We see no reason why NYC, often touted as the "greatest city in the world", cannot adopt and achieve this same goal.  Please join us in supporting this no-kill mission. Thank you!