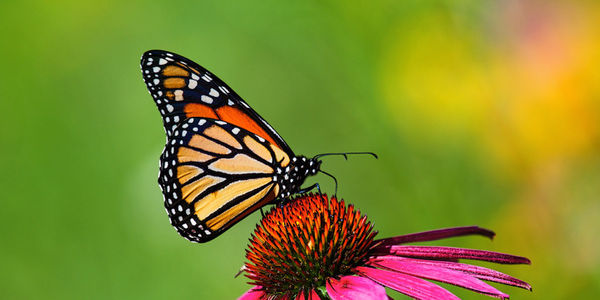 UPDATE: Time is running out. Bulldozers have arrived at the site of the crucially important National Butterfly center. Trump and his goons plan to plow right through it to build his stupid wall. This will destroy invaluable habitat for 200 species of butterflies including the endangered monarch.  It will also leave up to 70% of the sanctuary on the Mexico side of the wall. Please share, please care and please tell your representatives you are against this xenophobic landgrab.


Who's the latest casualty of Trump's horrendous war on asylum-seekers at the U.S.-Mexico border? Butterflies.

That's right, his already stupid border wall idea is now projected to plow down a butterfly sancutary! Please sign this petition to save the butterflies!
The National Butterfly Center near the Rio Grande River in Mission, Texas, features 100 acres of subtropical bushlands that are home to more than 200 species of butterfly. It serves as critical habitat for the Monarch butterfly and other endangered species such as the ocelot and jaguarundi.

Is nothing sacred anymore? The Supreme Court just upheld a ruling saying that Trump can bypass 28 federal laws  (including the Endangered Species Act, the Safe Drinking Water Act, and the Clean Air Act) for his ridiculous border wall.

The butterfly sanctuary is home to 200 species of butterlies. Plus, the sanctuary serves as a crucial stopping place during migration for the "King of Butterflies," the Monarch butterfly, which is in so much danger right now thanks to human pollution. The wall would literally require bulldozing most of this land and splitting the rest up, not allowing the sanctuary to grow new plants that are required to save the butterflies. The wall would even be too high for some birds and butterflies to get over, thus cutting them off completely!

As for the human effect in this specific area in Texas, there would be extreme flooding and humans would be cut off from their water supplies.

We are living in a nightmare world and we won't get to wake up without intense activism.

Please add your voice to this call for some kindness, reason and a check on an administration that is running amuck with anti-science, anti-environment and anti-wildlife policies and rhetoric.

Congress doesn't have to fund the dumb wall — that's why every American must tell their representative to say no on what could be one of the silliest solutions to a non-existent problem ever to be brought to the floor (and that's saying something).

Sign this petition to tell Congress that these beautiful and endangered butterflies are just the latest reason NOT to build a dang wall.
Sign Petition
SHAREShare this petition with friends!TWEETEMAILEMBED
Sign Petition
See more petitions:
You have JavaScript disabled. Without it, our site might not function properly.