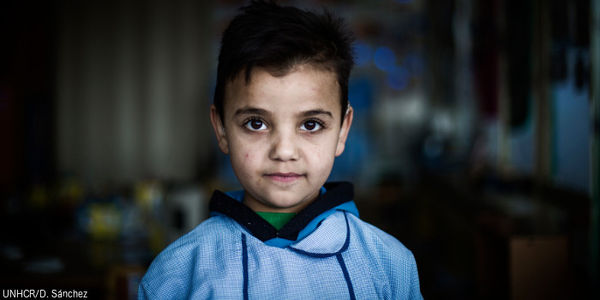 Syrian children are the innocent victims of a deadly war. Demand their protection.

An entire generation of children is growing up knowing nothing but death and destruction. Mohamed was a toddler when a shell struck his home in Palmyra, forcing his family to flee to Lebanon.

"We couldn't take him to the hospital because there was shelling. His hand had to be amputated," says his father.

There are now more than 1 million Syrian refugee children like Mohamed. Children whose earliest memories have been shaped by violence and exile. This number keeps growing.

Eight years into the conflict, 6.2 million people are displaced across Syria and 5.6 million have been forced to flee to neighbouring countries.

Children are running for their lives and leaving behind everything they know — their friends, their homes, their belongings.

Most Syrian refugee families live in desperate poverty, unable to feed their children, access healthcare or keep a roof over their heads.

The UN Refugee Agency, UNHCR, is working across Syria and neighbouring countries, providing families with shelter, healthcare, survival items and access to education.

These people did not choose to flee. No one does. But all people displaced by conflict have the right to protection and safety.

Add your voice today. Send a clear message that you stand in solidarity with displaced Syrians like eight-year-old Mohamed and demand their protection.

Help spread the word by sharing this petition with your friends and family today.

Care2
Syrian children are the innocent victims of a deadly war. Demand their protection.
SHARETWEET