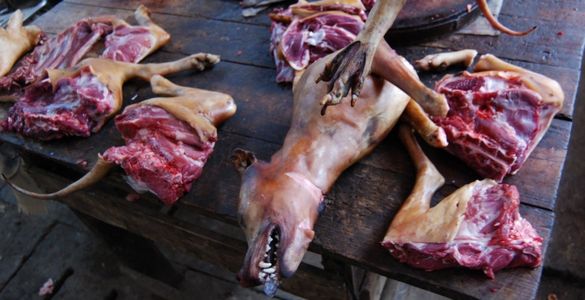 Save Dogs Around the World from Being Tortured and Eaten!

Dog meat is consumed in more places than you might think. From Western Africa and Central Asia to the far off islands of Tonga and some parts of Europe – every year, millions of dogs are killed and eaten around the world.

Sign this pledge to join our urgent movement to save dogs from being slaughtered for their meat!

Summer is an especially dire time for our furry friends. Each year in June, an estimated 1,000 dogs are boiled or skinned alive, and then butchered for the Yulin Dog Meat Festival in China.

Some of the poor creatures are reported to be household pets stolen from their families to feed festival goers. For weeks during July and August, thousands of dogs are killed in South Korea so that vendors at the Boknal Festival can serve the popular Peppery Dog Meat Soup. And in Togo, teenage boys are forced to gorge on dog meat for seven days as part of an August coming-of-age ceremony.

But the horror doesn't end with festivals. Dogs are killed for food every day all year round. On the island of Sulawesi, Indonesia, dog markets have become tourist attractions where sightseers can see the animals in their last terrifying moments before being slaughtered. In the Appenzell and St. Gallen areas of Switzerland, some farmers still kill dogs for personal consumption or to give as a gift to friends. And in the markets of Nigeria, the Philippines, and Vietnam, the dog meat trade is thriving.

That's why Care2 has launched a campaign to stop dog meat consumption worldwide. By signing this petition, you will sign on to help fight dog meat festivals, markets, and trade across the globe.

Over the next several weeks you will receive our most urgent petitions to help stop the inhumane slaughter of millions of dogs this year. You will be a part of the powerful movement of animal lovers that will demand that decision makers end the extreme cruelty perpetrated against dogs around the globe.

So, are you ready to make a difference?

Please sign this petition to join us in our campaign to make 2019 the year that dog meat festivals and markets were stopped once and for all.

Care2
Save Dogs Around the World from Being Tortured and Eaten!
SHARETWEET