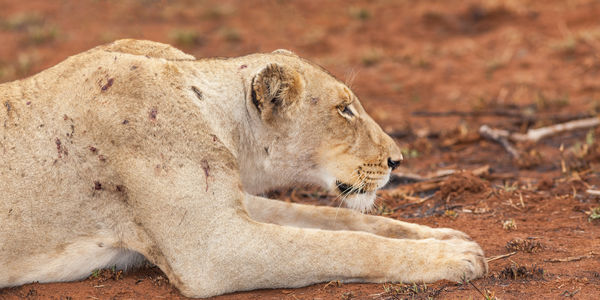 Thirty captive lions, bred for human entertainment and gain in South Africa, have been euthanized after they were found by an animal rights group helping animals recently affected by wildfires in the area. These magnificent creatures were emaciated -- they had been starving long before flames engulfed their inescapable enclosure and left them with gruesome, painful injuries that their owner allowed them to suffer from for days with no care or relief.

Sign now and tell the South African Government to charge the owner of these lions with animal cruelty under the Animal Welfare Act 1985 and stop him from owning animals altogether!

Apparently, nearly 60 lions on the compound were only being fed if cattle, chickens, or wildlife nearby happened to die -- nothing near large or consistent enough portions to keep these ravenous, imprisoned carnivores in good health. But then, the fires came and made everything far worse. SPCA representatives found them in a sorry state from the inferno. Many were unable to stand from smoke inhalation, exhaustion, and starvation. A few of the lions were so badly choked with smoke that their lungs were filling up with blood, drowning them. They laid with their paw pads turned up towards the sky, desperately trying to keep the burned off, bloody skin away from anything that would hurt them further. One lion's eyes literally exploded from the heat.

All in all, 30 lions had to be humanely euthanized by the SPCA, who worked tirelessly to make sure their bodies were cremated so that they could not be further defaced and picked apart for profit and trophies.

Lions under South African law can be kept legally on farms for game hunting, circus use and the cubs taken away from their mothers to petting zoos and bones sold for use in some medicines. These lions are a national symbol of the very country that lets this kind of abuse happen.

The South African Government must set an example for anyone else that would so neglect and abuse lions and other captive animals. Act now and demand this owner be charged, and that he be barred from ever keeping animals ever again!