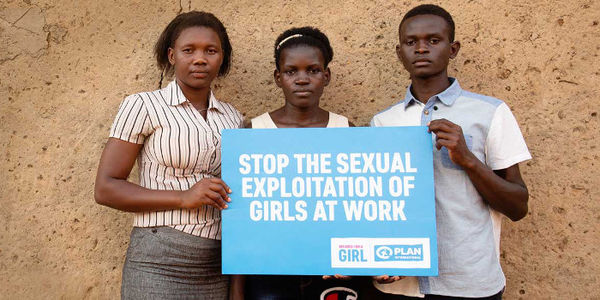 Stop the Sexual Exploitation of Girls in Uganda

As many as one in ten girls in Uganda have been affected by sexual abuse and exploitation. And girls tell us that this is a real issue for them at work.

Girls and young women are often financially desperate, and jobs are hard to come by. Living in poverty with little options for escape means that these girls are at high risk of exploitation.

Some bosses coerce girls into having sex with them to secure a job, then force them to have sex with customers to keep it. With no other options girls stay in these awful situations, hoping it will get better.

When girls and young women are brave enough to speak out about being exploited, they are often ignored, not taken seriously, or silenced. This has to change.

The Ugandan Ministry of Gender, Labour and Social Development is about to launch an official consultation on the sexual exploitation of girls and young women at work. This is a huge opportunity to end this awful abuse of power.

Youth advocates Fiona, Faridah and Rowlings are calling for this consultation to focus on why action isn't being taken when incidents of sexual exploitation are reported. And they want you to help raise their voices.

Will you stand with them?

Sign their letter to the government and make sure their voices are heard. Your signature will be delivered to the Minister to show that people around the world support the youth advocates in their campaign.

I support the Ugandan Youth Advocates campaign to end sexual exploitation in the workplace.

One in ten girls in Uganda are affected by sexual abuse and exploitation, many while at work. When they are financially desperate bosses can take advantage – forcing them to have sex with customers to get and keep jobs.

This is happening to our sisters, our friends and our classmates.

Girls are being threatened to stay silent, and when they are brave enough to report it perpetrators aren't properly investigated or brought to justice. This must change.

We are writing to ask that you focus your inquiry into the sexual exploitation of girls at work on why action isn't being taken when girls report incidents.

We must listen to girls and end this abuse of power.

Care2
Stop the Sexual Exploitation of Girls in Uganda
SHARETWEET