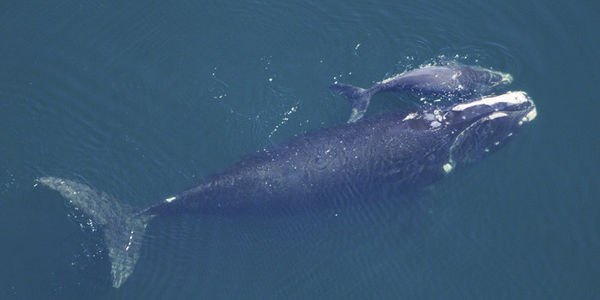 A recent report by the National Oceanic and Atmospheric Administration notes that there are only about 450 North Atlantic rights whales left, and that 17 have died so far in 2017.

If the SECURE Act becomes law, the Marine Mammal Protection Act and other measures vital to the survival of the North Atlantic right whale and other endangered marine mammals would be weakened and undermined.

It would also threaten the management plan for the National Petroleum Reserve-Alaska (NPR-A), a dangerous step towards toppling the balanced approach reached four years ago to allow for development while still protecting key nesting habitats and calving grounds for populations of caribou, migratory birds and other iconic wildlife such as wolverines.

Together, we must oppose this effort to weaken our environmental safeguards and remove protections for wildlife in order to expedite a push for oil and gas exploitation.

As a constituent, I am writing to express my opposition to the SECURE American Energy Act, H.R. 4239, and to urge you to vote against the bill should it reach the House floor.

Activity in the ocean relating to oil and gas leasing can have serious impacts to marine life and sensitive habitats, including the endangered North Atlantic right whale. The SECURE Act seeks to expand offshore oil and gas extraction by undermining the Marine Mammal Protection Act (MMPA), a key U.S. law that mitigates the threat of industrial activity to marine life. The bill amends the MMPA to weaken standards in place for the permits required to conduct offshore industrial activity that would result in the harassment that can lead to a range of consequences impacting marine mammals, prevent the regulatory agency from requiring almost any kind of mitigation, and require automatic approval of permits if the agency misses a series of tight deadlines.

The SECURE Act would open up and expand development in many sensitive areas that are critical to wildlife. Offshore, the bill would remove presidential authority to withdraw offshore areas from consideration for oil and gas leasing, and nullify existing withdrawals put in place by previous presidents. This authority has been used in the past to protect sensitive marine ecosystems, like the December 2016 decision to protect 31 Atlantic canyons, including the Hudson Canyon off the coasts of New York and New Jersey, which provide key habitat for many of the species that provide the foundation for the commercial fishing industry on the East Coast and serve as waystations for migrating species like whales and marine turtles. The bill also terminates the president's authority to create Marine National Monuments, another tool that has been used by past presidents to provide critical protection to sensitive undersea environments.

Onshore, the bill reopens the 2013 Integrated Activity Plan (IAP) for the National Petroleum Reserve-Alaska (NPR-A), a dangerous step towards toppling the balanced approach reached four years ago to allow for development while still protecting key nesting habitats and calving grounds for populations of caribou, migratory birds and other iconic wildlife such as wolverines.

If enacted into law, the SECURE Act would threaten wildlife and sensitive habitats across the United States and the OCS. I strongly oppose this effort to weaken environmental safeguards and protections for wildlife in order to expedite a push for energy development and urge you to vote "no" on the bill. Thank you for your consideration.

[First Name] [Last Name]
Sign Petition
SHAREShare this petition with friends!TWEETEMAILEMBED
Sign Petition
See more petitions:
You have JavaScript disabled. Without it, our site might not function properly.