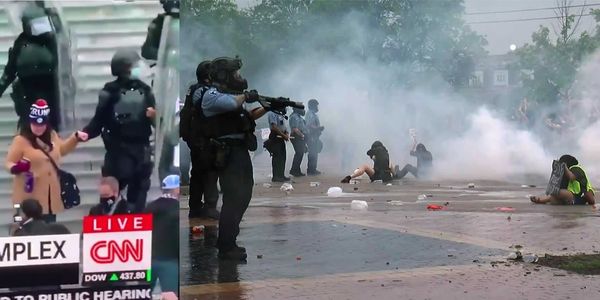 If police didn’t need militarization during the siege of the U.S. Capitol Building, they don’t need it for peaceful protests...or at all

On January 5th, 2021, Kenosha prosecutors announced that the police officers who shot innocent Black man Jacob Blake in the back seven times while his children watched will not face any consequences.

On January 6th, 2021, Capitol police allowed a mob of pro-Trump violent extremists to storm the Capitol Building, taking selfies with and opening barricades for the terrorists.

This juxtaposition serves as a reminder that in America, being Black or protesting for Black Lives is met with police brutality, while flat-out terrorism and violent insurrection, when perpetrated by white people, are met with enabling and literal handholding from police.

Every year, police forces across the country collectively spend BILLIONS of dollars on military-grade weapons, vehicles, and other equipment -- just to use them against peaceful citizens, and not against insurrectionists who violently threaten our very democracy. If they didn't need militarization on January 6th, they don't need it at all.

Sign the petition if you want to see the police in the U.S. become totally demilitarized!

Widespread militarization of American civil police forces began around the same time as the Civil Rights Movement and its protests calling for racial equality. This intense arming and tactical pivoting from defensive to offensive gained a great deal of traction during the War on Drugs, which systematically and intentionally targeted Black people and people of color. That, coupled with the fact that the police were invented as an institution with the singular purpose of catching runaway enslaved people tells us one thing: This has always, to some extent, been about race.

And what we saw in the summer of 2020 makes that impossible to deny. Police ramming armored cars into crowds of fleeing, peaceful protestors. Officers spraying journalists with tear gas and rubber bullets. Police shooting these 'non-lethal' rubber bullets (the blunt trauma they cause has sometimes led to death) at protestors; at least three people lost one of their eyes after they were struck. Time and time again, police brought violence to peaceful protests in defense of Black Lives by showing up in tanks, using horrifying military tactics like kettling, and employing lethal force at every turn against non-threatening, non-violent, unarmed citizens.

Police met an armed mob taking over our nation's Capitol Building, on the other hand, with tact, restraint, and open arms. Video footage shows officers moving a barricade aside so that the violent extremists could come closer to the building where our members of Congress met to verify the results of a lawful election. Once these terrorists gained access to the building by breaking windows and scaling walls, one clip shows a police officer posing for a selfie with some of them. Journalists at the scene described again and again the "gentle" manner in which these terrorists, most of them white, were dealt with. One of them was even tenderly helped down the Capitol steps, holding hands with an officer. The National Guard was not sent into to protect the Capitol Building until AFTER the extremists had cleared out -- and even then, the first wave of defense was deployed UNARMED.

The militarization of our civil police forces has been justified in the past to combat the rise of terrorism and the increased availability of high-powered weapons. Well those who invaded the Capitol Building were terrorists, and many were armed. They explicitly stated the intent to subvert the democratic process and some with the intent to hold lawmakers hostage. If the police aren't going to use the resources they so desperately 'need' for their intended purposes, it's time we took them away.

Sign the petition if you want to see a complete demilitarization of police forces in the U.S.

Care2
If police didn’t need militarization during the siege of the U.S. Capitol Building, they don’t need it for peaceful protests...or at all
SHARETWEET