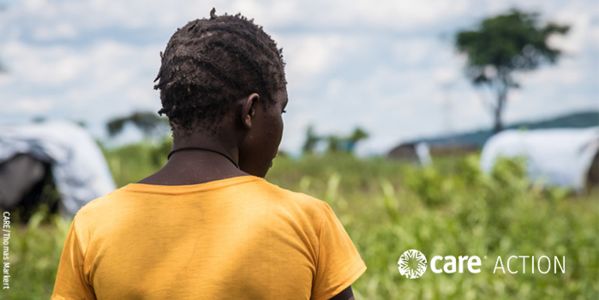 Tell U.S. Congress: Break the Cycle of Violence and Hunger for Women Everywhere

When less food is available, women and girls suffer more. It's that simple. Your elected officials have the power to break the cycle of rising gender-based violence and food insecurity by passing the Safe from the Start Act – but they must hear from you first.

Gender-based violence is on the rise, which includes intimate partner violence, child, early and forced marriage, and sexual abuse. At the same time, global hunger is at an all-time high. In places where feeding one's family is considered part of a woman's worth, being unable to provide food only multiplies her risk of experiencing gender-based violence.

Tell U.S. leaders to act now and protect women and girls everywhere.
read petition letter ▾
When gender inequality goes up, including violence against women and girls, food security goes down. As the compounding stressors of conflict and food insecurity put women and girls at higher risk for violence, I'm speaking up with CARE Action advocates nationwide to urge you to support passage of the Safe from the Start Act in the House of Representatives and the Keeping Women and Girls Safe from the Start Act in the U.S. Senate, which would prioritize the needs of women and girls in humanitarian emergencies and help break the cycle of rising gender-based violence and food insecurity.

Women and girls are impacted greatly during humanitarian crises, which currently affect more than 324 million people worldwide. Not only do crisis-affected populations face displacement and the loss of their homes, livelihoods, and loved ones, they often are vulnerable to threats such as rape and sexual assault, domestic violence, or child marriage during the emergency. Gender-based violence (GBV) is a stark violation of their rights and dignity and stands in the way of the security and health of refugees and displaced people during a crisis.

The combined impact of the COVID-19 pandemic and the growing food crisis has been increasing the vulnerability of women, girls, and marginalized individuals to GBV in humanitarian contexts. Programs authorized under the Safe from the Start Act would help humanitarian aid workers prevent GBV by equipping them with skills, protocols, and other tools to prevent gender-based violence at the start of an emergency. The bill will lead to a more effective response to GBV in humanitarian settings, including GBV exacerbated by food insecurity.

The Safe from the Start Act ensures that those responding to humanitarian emergencies can effectively identify and address GBV from the onset of a crisis, giving women and girls greater opportunities to help prevent such violence and contribute towards improving the safety of their communities. The goal of the Act is to reduce the incidence of GBV, ensure quality support for survivors from the very beginning of emergencies through timely and effective humanitarian action, and promote standards for prevention, mitigation and response to such crises.

In the wake of emergencies or crises, women and girls can be particularly vulnerable but also critically important to efforts aimed at returning their communities to normalcy – this is especially true in the agriculture sector. Women and girls make up the majority of food producers, processors, and providers, and are responsible for nearly 90 percent of household food preparation and most food shopping – yet often eat last and least when food is scarce. In times of crisis, women face additional risks to GBV and other forms of violence while securing food for their households. The Safe from the Start Act recognizes the value of women in meeting community and cultural needs during crises and empowering them to be leaders in those efforts. This will make U.S. contributions towards humanitarian aid stronger and more effective by both protecting and empowering the women and girls affected by conflict and disaster.

The United States has within its power the ability to provide support to those who have survived or who are at risk of these horrific acts of violence. We can help ensure that women's voices are heard in leadership and decision-making so that such acts can be prevented. We can empower women and girls to be agents of change in their communities, particularly during times of crisis. Your leadership in speaking and acting out against GBV in humanitarian emergencies is critical – particularly with the U.S. as the world's largest donors to humanitarian assistance.

I urge you to use your voice in Congress to support the Safe from the Start Act in the House of Representatives and the Keeping Women and Girls Safe from the Start Act in the U.S. Senate. The bill makes clear that the United States stands alongside the millions of women and girls caught in crises across the world. I am standing up for this bill because it signals that women's rights, safety, and well-being matter – and I urge you to stand up for them too.
Sign Petition
SHAREShare With FriendsTWEETEMAILEMBED
Sign Petition
See more petitions:
You have JavaScript disabled. Without it, our site might not function properly.