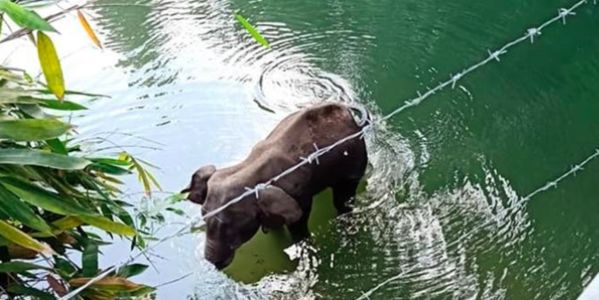 In many countries where wild elephants roam free, there exists a certain tension between these iconic creatures and the human population -- habitat loss causes many elephants to wander into farms and villages in search of food. Humans have been known to retaliate violently and face little punishment. But Kerala, a state in southern India, has long upheld strict wildlife protections, producing a harmonious relationship between humans and animals. That is why it is so heartbreaking that in May 2020, a pregnant elephant died a slow, agonizing death in Kerala at the hands of humans.

Please sign the petition today and urge Kerala's Forest and Police Departments to find and prosecute this elephant's killers to the fullest extent of the law!

This poor elephant was simply looking for something to eat when she found herself in the village of Malappuram. She was pregnant, and must have been overjoyed to find a sweet pineapple waiting for her. But the pineapple had been stuffed with firecrackers -- a tried and true method for folks who can't be bothered to find humane ways to protect crops. The minute this unwitting elephant bit into the pineapple, the firecracker exploded and tore through her lower jaw, upper jaw, and tongue.

Her mouth on fire, the mother-to-be ran to a nearby river. She stood in the water for hours, desperate to relieve the excruciating pain in her mouth. Eating was impossible, and she quickly became weak. Rescuers tried to get the elephant help, but she tragically died in that same river. She had been so desperate for the water to ease her suffering that she drowned. An autopsy revealed that she was 2-months pregnant.

The Indian Elephant is critically endangered -- habitat loss, poaching, captivity, and clashes with humans have all taken a terrible toll on the wild population. If crimes like this one go unpunished, that death toll will continue to rise. Not to mention that it is totally unacceptable for villagers and farmers to protect their crops by such inhumane means -- hiding explosives in fruit does not deter elephants, it tricks and kills them. They could invest in humane methods -- loud noisemakers, bright lights, and patrols have all been proven effective.

Those who baited this elephant into a tragic death must be held accountable. Please sign the petition if you want the Police and Forest Departments of Kerala to find and charge these criminals to the fullest extent of the law!