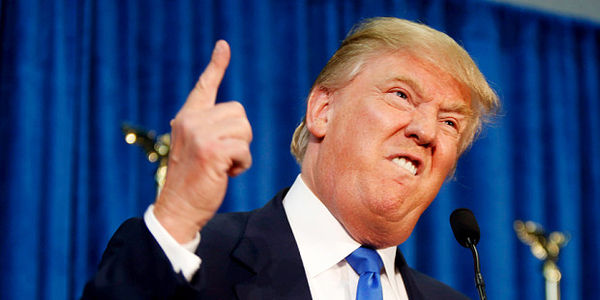 1. Says can't remember trying to get casinos in Fl.
2. Doesn't know the difference between Kurds and Kuds
3. Denied filing for bankruptcy 4 times
4. Says about border security, "Our leaders are stupid, our politicians are stupid, and the Mexican government is much smarter, much sharper, much more cunning, and they send the bad ones over because they don't want to pay for them, they don't want to take care of them. Why should they, when the stupid leaders of the United States will do it for them? And that’s what’s happening, whether you like it or not.".
5 Thinks Mexico is going to pay to build a fence
6. Has called women he doesn't like ‘fat pigs,’ ‘dogs,’ ‘slobs,’ and ‘disgusting animals,’ and all but called Forina ugly.
7. Says Mexico doesn't have birth right citizenship and America is the "only one" that does
8. Says that under the Iran deal "If iran attacks Israel, We're supposed to be on Iran's side.
9. Says that"We have 93 million people out of work. They look for jobs, they give up, and all of a sudden, statistically, they're considered employed."
10. Says we are the most highly taxed nation in the world.
11. Said of Megan Fox "Well, some of the things that she said, I didn't say, okay?"
12. Says about immigration, "This wasn’t a subject that was on anybody’s mind until I brought it up at my announcement."
13. Says about unemployment, "Income levels and unemployment numbers "are worse now than just about ever" for African Americans.
14, On illegal immigrants, "I am now hearing it's 30 million, it could be 34 million, which is a much bigger problem."
PS. The U.S. Department of Homeland Security comes up with an estimate of the number of illegal immigrants each year, and its most recent estimate was 11.4 million unauthorized immigrants as of January 2012. That includes those who entered the United States illegally and those who overstayed their visas.
15. Says about Burghdahl, they get five killers that they most wanted in the whole world, who are right now back on the battlefield, trying to kill everybody, including us.
PS. The five detainees (sometimes called the Taliban Five) were released to the Persian Gulf nation of Qatar. Qatar is understood to be a neutral state, as opposed to a "battlefield" for insurgent activity. Under the agreement, the five released detainees are not allowed to leave the country. This travel ban was initially supposed to last one year, ending June 1, 2015, but it has been extended. Multiple administration officials and experts told us the Taliban Five haven’t left Qatar, and we couldn’t find any evidence to the contrary.
16. Says John McCain "has done nothing to help the vets."
17. Says about Syrians, "If you're from Syria and you're a Christian, you cannot come into this country,
18. Says about Jeb Bush, "You know, the sanctuary cities, do you know he had five of them in Florida while he was governor?
10. About the Affordable Care act, "the $5 billion website for Obamacare, which never worked. Still doesn't work."
20. More about Mexico, "The Mexican government forces many bad people into our country because they're smart," he told interviewer Katy Tur. "They're smarter than our leaders, and their negotiators are far better than what we have, to a degree that you wouldn’t believe. They're forcing people into our country. … And they are drug dealers and they are criminals of all kinds. We are taking Mexico’s problems."
21. On abortion, "In terms of polling, the pro-choice (support) is going down a little bit,"
22. On security says, "Even our nuclear arsenal doesn't work. It came out recently they have equipment that is 30 years old. They don't know if it worked.
23 On unemployment, "Our real unemployment is anywhere from 18 to 20 percent," Trump said. "Don't believe the 5.6. Don't believe it."
24. On the GDP, "The last quarter, it was just announced, our gross domestic product is a sign of strength, right? But not for us. It was below zero. Who ever heard of this? It's never below zero."
25 On Obama's fundraising trip to New York, "He raises a million dollars and it costs between $25 million and $50 million, and they close up the entire city of New York,"
PS. Ciost was closer tp 5 million.
26. Again on the Affordable care Act, "ObamaCare enrollment lie: Obama counts an enrollee as a web user putting a plan in ‘their online shopping carts’
27. On his popularity, CNN did a poll recently where Obama and I are statistically tied.
28. On Obama's birth certificate, "He spent $2 million in legal fees trying to get away from this issue."