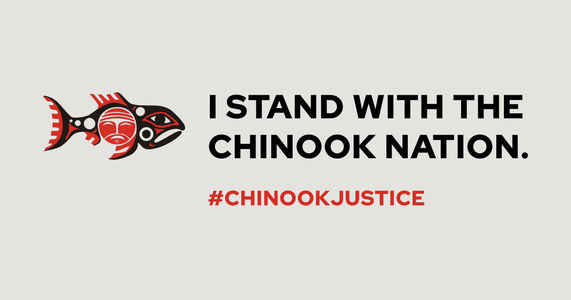 The Chinook Indian Nation are the original people of our ancestral homelands at the mouth of the Columbia River. We are a sovereign nation that inherited that inalienable status from our land and our ancestors. We continue to govern ourselves and have one of the oldest living tribal constitutions in the Pacific Northwest.

Over 20 years ago, the U.S. government went back on its word and rescinded our federal recognition. Without it, our tribe has been unable to access critical resources for cultural preservation, housing, utilities, health care, food, and other basic needs — benefits that are critical to the survival of tribes across the country.

Congress has the power and authority to recognize tribes.

Add your name and send a letter to tell your legislators to federally recognize the Chinook Nation!
read petition letter ▾
Dear ______________:

I urge you to restore federal recognition for the Chinook Indian Nation and acknowledge them as a sovereign nation. The U.S. government has not fulfilled its promises to the Chinook Nation.

This has resulted in a humanitarian crisis for the Chinook Nation. Over the last 20 years, the refusal to grant federal recognition has cost the Chinook Nation at least $200 million. The Chinook people of Washington and Oregon are impacted by a lack of legal protections and access to health care, educational and housing opportunities, as well as other federal and state resources.

Since 2002, Congress has not scheduled a single hearing to reinstate Chinook recognition nor granted the Bureau of Indian Affairs authority to restore its recognition. Their rural location and lack of a powerful voice means their efforts for recognition have been largely ignored.

As a member of Congress, you have the authority to recognize tribes and the power to restore their federal recognition. Federally recognized tribes are entitled to federal benefits like housing, utilities, food, and other basic needs — benefits that are critical to the survival of tribes across the country. The restoration will assure a much-needed economic boost, enhancement of critical resources, and protection of the Pacific Northwest's environment that can only happen from restoring federal recognition for the Chinook Indian Nation.

Stop the cultural erasure of the Chinook people. It's time the federal government honors its commitments and acknowledges the sovereignty of the Chinook Indian Nation.