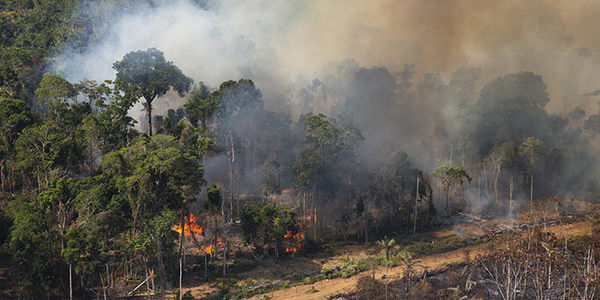 Help stop deforestation and wildfires in the Amazon and Pantanal

From California to the Amazon, we are yet again witnessing a series of historic and destructive wildfires around the world. These fires harm the health of people, wildlife, and habitats; contribute to climate change; and cause billions of dollars in damage each year.

Most global deforestation is driven by the expanded production of just four agricultural commodities: palm oil, beef, soy, and timber. The United States can and should work with countries to prevent illegal deforestation and to protect biodiversity hot spots like the Amazon and Pantanal from land conversion and wildfires — and ensure that products that drive forest loss have no place in American markets.

We need your help. Will you ask your representative to take action to end deforestation worldwide and increase funding to protect biodiversity strongholds like the Amazon and Pantanal?
read petition letter ▾
Dear Representative,

We are once again seeing a historic wildfire season, both at home and abroad. This includes South America's Amazon rain forest and the Pantanal wetlands, which are critically important areas of biodiversity and major stores of global carbon.

In July, fires in Brazil's Amazon rain forest surged 28% over even last year's levels while the Brazilian Pantanal, the world's largest tropical wetland area, experienced an astonishing 241% increase in wildfires compared to last year. Tropical wildfires and the illegal deforestation activities that often drive them are a threat not just to countries such as Brazil but to the health and safety of our entire planet. The US can and should be doing more to help protect these globally important regions.

I ask that you take the following urgent actions to protect the Amazon, the Pantanal, and the world's remaining critical habitats from further deforestation and degradation:

• Support increased funding for international conservation programs that protect forests and natural habitats. As you consider final funding levels for Fiscal Year 2021, Congress should support an end to deforestation worldwide and increase funding for international programs that prevent deforestation and habitat conversion in the Amazon and Pantanal and elsewhere, including efforts to prevent and respond to wildfires and support the rights of local and Indigenous communities in these areas. Such funding should also be included as part of the response to the current pandemic, given that deforestation is a major cause of emerging diseases, such as COVID-19, that spillover from wildlife to humans.

• Enforce existing law to stop illegal logging. Congress should direct US government agencies to expand enforcement of the Lacey Act plant amendments and provide the support needed to end the import of illegally logged products into the United States, further reducing the incentives for illegal deforestation globally.

• Prevent the import of products grown on illegally deforested lands. In many tropical areas, including the Amazon and Pantanal, forests are illegally cleared to make way for agriculture production, including for palm oil, beef, and soy. Congress should pass legislation to stop the import of agricultural products grown on illegally deforested land, which will protect forest habitats and communities while leveling the playing field for producers that respect the laws of countries where these products are sourced.