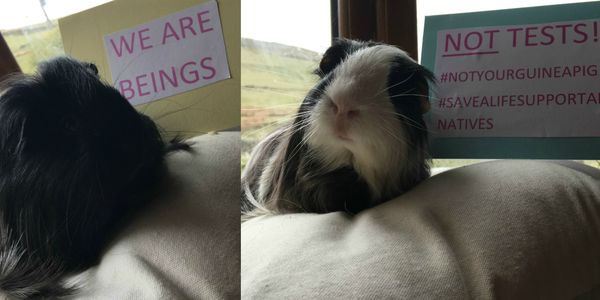 Demand that the UK government increases funding for alternative research instead of testing on animals!

Last year in the UK 4.1 million innocent animals were used for testing. According to an animal charity less than 3% of funding goes towards finding and improving other alternatives.

Many animals are sadly used for testing, but the most common being: Fish, Mice, Rats, Guineapigs, cats, dogs and Monkeys.

These animals all feel immense pain, loneliness, psychological disorders and conditions along with the illness they've been infected with. Just like us they have motives to play and love, start a family and avoid pain and sickness, instead they receive pain, loneliness, suffering and a painful undignified death. To me, that's inexcusable, I believe in a fairer and kinder world than these poor creatures have to bear every day. Even if animals by some miracle did not suffer, there is still the question that animals are NOT ours to use. They are beings, they have an equal right to life just as you or I.

It is currently illegal to test on animals when there is an alternative. However, although there are many alternatives, because of lack of funding they have not been advanced enough to replace animals. Therefore, we are stuck. We need more funding now to replace this cruelty or we will carry on in a cycle of torture.

As a highly developed country with amazing advancements in science, I strongly urge the UK government to dramatically increase funding for researching new alternatives and advancement in pre-existing ones. I also call for the UK government to do more in convincing, enforcing and regulating private companies, universities and charities to fund more alternatives. For a brighter, safer, cruelty free future for both humans and animals.

Experiments on animals are carried out for many different purposes:

If you don't necessarily "mind" that animals are subjected then it's been widely proven that alternative methods are also far cheaper and SAFER for humans. Because they have to use less of the drug, no spending on "looking after the animals" and are well, related to humans!

Here is just a little taste sample of why animal testing does not always help us, in fact can be dangerous to us:

Care2
Demand that the UK government increases funding for alternative research instead of testing on animals!
SHARETWEET