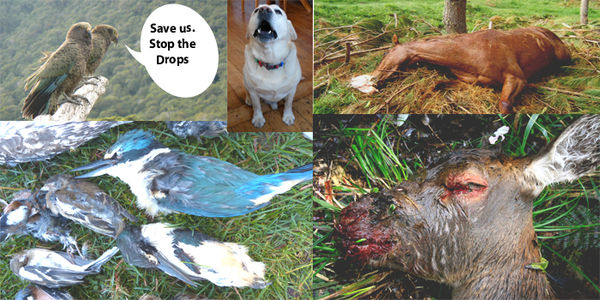 STOP THE DROPS! SAVE ANIMALS FROM TORTUROUS 1080 POISON DEATHS.

In the quiet of New Zealand forests, hidden from public view, tens of thousands of animals are dying. Screaming. Squealing. Writhing. Convulsing. Fluttering. Suffering. These animals have been poisoned by helicopter drops of lethal 1080 (sodium fluoroacetate) poison baits.

These poison baits are dropped by New Zealand government to target rats, stoats and possums. But the poisons are indiscriminate, and can cruelly kill any animals who ingest baits or a poisoned carcass.

Forest and Bird states "1080 poisoning is a humane way to kill mammalian pests."

Sign the petition if you believe 1080 is cruel and you want to STOP ANIMAL SUFFERING.

Is it ok to kill deer like this, NZ?

As concerned global citizens we urge you to institute an immediate moratorium of Compound 1080 that threatens life in the New Zealand ecosystem. The aerial spreading of hundreds of tons of poison baits kill animals in extremely inhumane ways, and present unacceptable risks to human health, New Zealand exports and tourism. We ask that you end the ecocide immediately. Recognize the rights of nature and citizens to a non-toxic environment. New Zealand has an unprecedented opportunity to be a world leader in clean green products and standards of humanity to all animals. Please support what the world is asking.