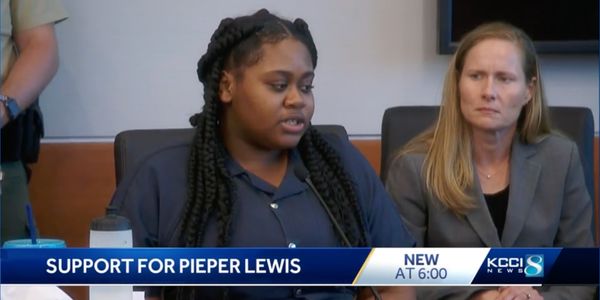 Pieper Lewis was only 15 years old and trying to escape her abusive mother, when the 28-year-old man who took her in began to force her to have sex with other men for money. Her situation was truly horrific. In May 2020, Lewis was forced at knifepoint to go to the house of a man who had already raped her multiple times. The man drugged and raped Lewis again. When she awoke and realized what happened, Lewis fatally stabbed him while he was sleeping. While it's clear that Lewis' was doing whatever she could to protect herself from the violent and traumatic situation she was in, Lewis now has to pay $150,000 in restitution to the man's family and is sentenced to five years of supervised probation.

Lewis earned her GED while in juvenile detention last year, and has dreams of being a fashion and graphic designer, as well as a juvenile justice advocate for young people in Iowa. Before her sentence was handed down, Lewis, now 17, expressed remorse for her actions, but said that she too, was a victim. "That day, a combination of complicated actions took place resulting in a death of a person and stole the innocence of a child," she said.

A GoFundMe for Lewis was started by her former teacher to help Lewis pay the $150,000 restitution and offer her a chance to start fresh. But Lewis can't truly start fresh until she is granted clemency. Even without the financial burden, having to pay her rapist's family is absurd. Plus, serving five years of probation for an incomprehensibly traumatic event is deeply cruel and unnecessary.