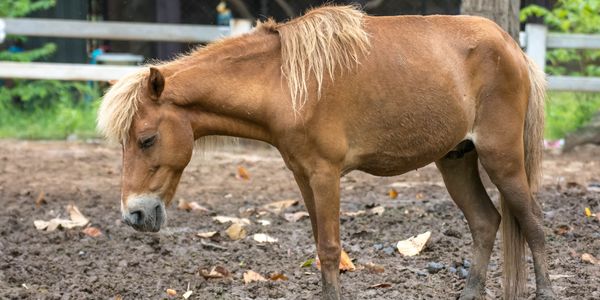 Just a few weeks ago, protesters drew attention to the inhumane conditions at the Griffith Park Pony Rides in Los Angeles. According to an inspection by an equine expert back in January, these poor ponies were in need of medical attention that they simply weren't getting – their owner was too busy selling their bodies for human entertainment. And now that temperatures are beginning to climb in LA, these ponies' lives are only going to get more painful. In any scenario where animals are being used for human gain, abuse and exploitation are far too possible – and clearly, pony rides are no exception.

Sign the petition now to demand that the city of Los Angeles cancel the contract of the concessionaire and pass an ordinance banning pony rides!

During the inspection in January, equine expert Dr. Rachael Sachar found lesions on many of the 38 ponies – saddle sores and callouses on their withers, likely from uninterrupted, rough riding without proper cleaning or veterinary care. Records showed that no action was being taken to heal, treat, or relieve these ponies' wounds. On top of that, "most of the ponies were geriatric," older animals that should be living peacefully and easily near the end of their lives. Instead, they are being forced to perform labor "disguised as child entertainment." Nearly every pony was in need of dental work, and their enclosures were reported as ill-draining, muddy, and unsuitable for shielding the sweet ponies from wind or rain. Add onto all of this LA's summer heat, and you've got one of the most miserable environments for an aging pony imaginable.

The Griffith Park Pony Rides owner, who continues to profit off the exploitation of animals, claimed that the facility shuts down pony rides if the temperature exceeds 95 degrees. But anyone who has stood in the sun in Los Angeles knows that even an 80 degree day can feel extremely hot if you're doing physically demanding labor. Plus, the report even stated that the ponies' access to shade and water access were in need of expansion.

The reality is that pony rides can be harmful to animals at all temperatures. Just like horse drawn carriages, innocent ponies should not be forced to do labor to entertain human beings, and more often than not, these scenarios develop into abusive work environments. In cases of animals performing labor for humans, individual failure to provide welfare and avoid neglect is too common for these operations to be worth it –  the city of Los Angeles should be banning the practice outright.

Sign the petition now to tell the City of Los Angeles that there is no excuse to continue such a shameful and abusive practice towards creatures as gentle as ponies. The city must pass an ordinance banning pony rides! Sign if you agree!