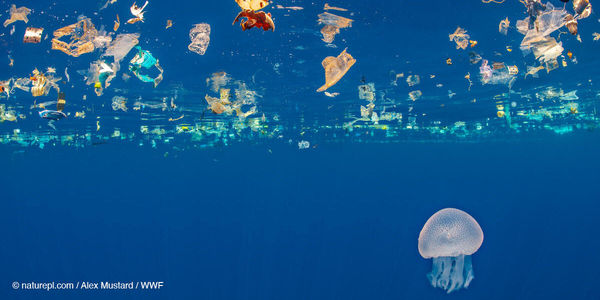 Join the Fight Against Plastic Pollution!

On September 1-2, 2021, world governments are meeting at the Global Ministerial Conference on Marine Litter and Plastic Pollution hosted by the UN Environment Programme. This is a crucial meeting in the step towards developing a global and legally-binding treaty on plastic pollution.

As heads of state gather, WWF is urging them to step up and work together to keep plastics out of our oceans — and I want to show them just how many WWF supporters are concerned about this growing crisis. So far, 760,000 WWF-US supporters have expressed their support for a global treaty. Will you add your name today and help us achieve our goal of 1,000,000 WWF-US names signed on by the start of the Conference?

When plastic enters our oceans, it poses serious risks to the animals that live there. Over 800 species are harmed by ingesting plastic, getting tangled in it, or otherwise interacting with plastic waste. And because it can take hundreds of years for plastic to decompose, we must come together now to keep plastic out of the oceans.

This is a global crisis. Oceans around the world are harmed by it. Every country is part of the pollution problem. And every country needs to be involved in solving it.

Join us in urging governments around the world to step up and stop the leakage of plastics into our oceans.
read petition letter ▾
Dear Honorable Heads of State,

Marine plastic pollution has serious consequences for people's well-being and their livelihoods. And it also has devastating impacts on life in our oceans — causing injury and death to fish, sea turtles, whales, birds, coral reefs and much more.

That's why we, the people of the world, ask you to create a global and legally binding agreement to stop the leakage of plastics into our oceans by 2030. The agreement should: