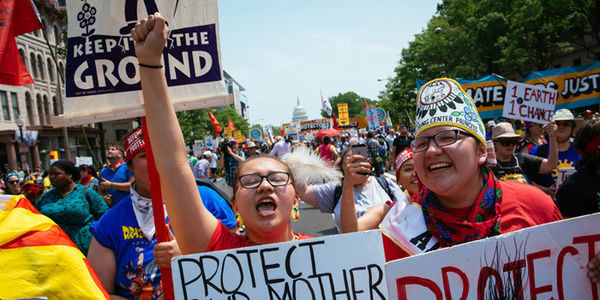 President Donald Trump announced that the United States would withdraw from the Paris Agreement on climate change.

This decision threatens our security, our public health and welfare, our economic prosperity, and our clean energy industry, which supports millions of U.S. jobs. It threatens the air we breathe and the water we drink. It threatens our ecosystems and disproportionately affects the most vulnerable people on our planet.

Withdrawing from the Paris Agreement does not represent the will of the people of the United States.

There is something you can do.

Governors, mayors, businesses, investors, and universities across the country have started collaborating as never before to work toward the goals of the Paris Agreement. They're still in, and we are, too.

Add your name and tell the 194 counties committed to the Paris Agreement that you, too, are still in.

We, the undersigned people of the United States, will continue to support climate action to meet the goals of the Paris Agreement.

1. Reduce my own carbon emissions and do what I can through everyday actions such as taking public transportation or carpooling, making my home more energy efficient, switching my home electricity to renewable sources, and limiting food waste.

2. Support U.S. states, cities, businesses, investors, universities, and other entities taking strong climate action and showing the world that the United States is still working to fulfill the Paris Agreement - and call on others to join them.

3. Urge President Trump to keep the United States in the Paris Agreement and protect federal safeguards for our health and environment from regulatory rollbacks and budget cuts.

4. Call on Congress to hold polluters accountable and oppose any efforts to weaken the environmental protections and climate policies that protect our health and well-being.

The people of the United States remain dedicated to creating a just, clean energy future. Together, we will protect the prosperity, security, and health and welfare of our country and the planet.
Sign Petition
SHAREShare this petition with friends!TWEETEMAILEMBED
Sign Petition
See more petitions:
You have JavaScript disabled. Without it, our site might not function properly.