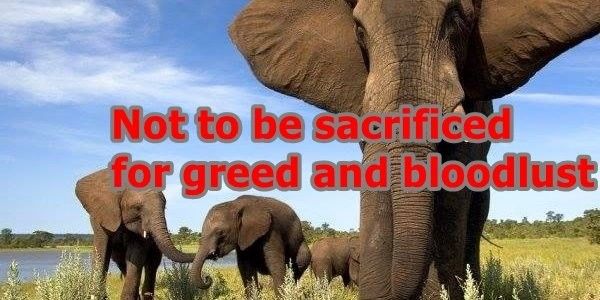 Keep Botswana a Safe Haven for wildlife. So no to European demands for Trophy Hunting!

The Minister of Natural Resources and Environment in Botswana, Tshekedi Khama, is sounding the alarm about trophy hunting in his country. While Botswana banned trophy hunting in 2014 and has taken the lead on wildlife conservation in Africa, the country is coming under immense pressure to reverse the ban from the pro-hunting lobby in Europe and neighbouring pro-hunting countries.

Botswana's policy to fight wildlife hunting is working, and there's plenty of proof: Wildlife that used to live in neighbouring countries are relocating to Botswana of their own accord. Ecotourism, such as wildlife safaris, has become a booming part of the economy as visitors relish the chance to observe these wild animals in their natural environment. In fact, ecotourism has even become Botswana's second-largest foreign exchange earner.

But now that wildlife are moving into the country in such large numbers, European hunters want access. In other nearby countries including Namibia, Zambia and Zimbabwe, the “game” has become scarce because of overhunting, poaching, and lack of basic water and infrastructure for the animals. By comparison, roughly 130,000 elephants now live in Botswana, which is the most in any country.

Therefore we urge the European Union to show unequivocal support for Botswana's decision to ban trophy hunting. In fact, Botswana needs more support to help it protect wildlife, not more pressure to do just the opposite. While Botswana is enjoying a boom in ecotourism and increased wildlife populations, its ecosystem is also buckling under the strain of supporting so many animals -- particularly elephants, which eat 600 pounds of food per elephant per day.

We also urge the European Union to pressure and support Zambia and Zimbabwe to fulfill their obligations to help develop the Kavango-Zambezi Trans-Frontier Park (KAZA), which is a regional initiative to help protect wildlife. Currently, Zambia and Zimbabwe are failing to both pay their KAZA subscriptions and help provide essential wildlife services, such as water. Botswana needs help in fulfilling its mission to end trophy hunting, rather than more political issues to contend with.

We the undersigned urge the European Union Commissioner for the Environment to stop the pressure on Botswana to lift the 2014 hunting ban.

Care2
Keep Botswana a Safe Haven for wildlife. So no to European demands for Trophy Hunting!
SHARETWEET