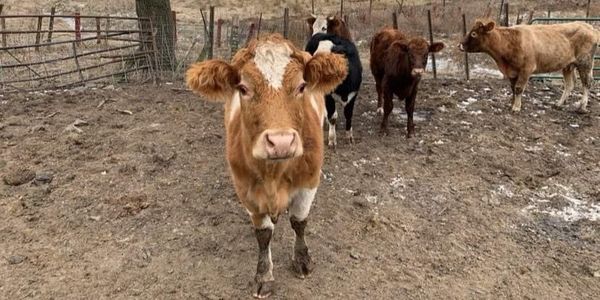 Mohawk Hudson Humane Society and North Greenbush police department have put the lives of about 15 cows, 10 pigs, and 28 ducks in jeopardy by giving them to operating farms that use and slaughter these same species — essentially giving these farms tens of thousands of dollars of free "product" while putting the animals' welfare at risk.

We demand that the Mohawk Hudon Humane Society:
(1) Immediately have the farms sign contracts that they will not breed, sell, or slaughter the animals while sanctuary homes are lined up,
(2) Allow relocation of animals from the farms to legitimate sanctuaries,
(3) Work with sanctuaries to find foster and permanent placement for each animal within 30 days.

Background:
On January 26, Mohawk Hudson Humane Society in New York arrived at a property where 165 cats, dogs, cows, pigs, ducks, chickens, and turkeys were being horrifically neglected. Though they initially intended to legally seize the animals, the property owners decided to surrender custody once authorities arrived. While Woodstock Farm Sanctuary (a vegan, no-kill animal sanctuary) loaded the 53 farmed animals they could fit into their vehicles and the MHHS loaded the cats, dogs, and one potbellied pig, farmers were also on the scene, taking free cows, pigs, and ducks to their operating farms. These farmers raise and kill these same species and are not rescue groups or animal sanctuaries.

At this time, there is no evidence Mohawk Hudson Humane Society in any way followed appropriate protocols for the animals given to the farms. The farms likely see these animals as tens of thousands of dollars worth of free "product" to slaughter, breed, milk, and otherwise use for profit. There is no evidence these farms signed any contracts stipulating the animals' safety. The farms were under no obligation to ensure these animals receive appropriate medical care after surviving horrible neglect, will not be bred, and will not be slaughtered. In response to concerned inquiries, the Humane Society stated, "While we know that most of these animals will live out their lives on these farms, there is a possibility that a few of them could eventually end up with other outcomes," making clear these animals are at risk and the Humane Society has failed to do their due diligence to ensure their safety.

For the farms, they hit the lottery. This is akin to giving rescued dogs to an operating puppy mill.
There are legitimate sanctuaries on standby who are able to immediately receive these animals for foster and placement in other legitimate sanctuary homes. We are demanding the Humane Society do right by the animals they "rescued" and fundraised off of and ensure the animals' safety TODAY.