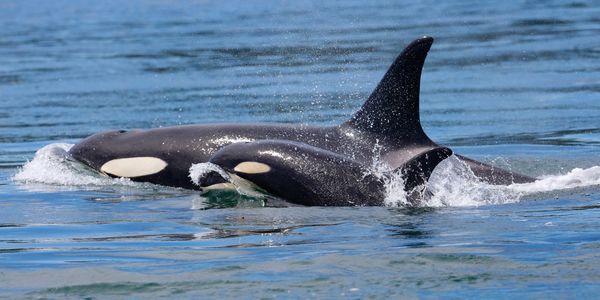 The killer whale who mourned her dead baby for 17 days just gave birth again, but she and her new baby are in danger

You may remember the story of Tahlequah, the killer whale who carried the body of her newborn calf over 1,000 miles as she mourned its tragically premature death. The mother whale didn't let the tiny corpse sink to the bottom of the ocean for at least 17 days, breaking hearts all over the world. But conservationists and animal lovers rejoiced when two years later, in September 2020, Tahlequah was spotted swimming happily with a brand new healthy and energetic calf. But Tahlequah and her family are not out of the woods yet since the U.S. Navy is forging ahead with a plan that could harm as much as 70% of these vulnerable whales.

Sign the petition and tell the U.S. Navy to halt their plans of sonar testing and training in the Southern Resident orca habitats off the West Coast! Let these precious animals live in peace!

Tahlequah and her baby are two of only 73 Southern Resident orcas left, a highly endangered distinct population found off the coast of Washington, Oregon, and British Columbia. Overfishing of their main food source, salmon, has driven their numbers to dangerously low levels, while toxic pollution from coastal factories, plants, and refineries have long poisoned them. And now, the U.S. Navy has said it is willing to possibly harm "up to 51 endangered orcas every year" in order to conduct sonar tests in the whales' habitat.

Navy sonar is an incredibly painful sound for orcas to hear, since they have evolved to be highly sensitive to sound -- they use their own kind of sonar, called echolocation, to communicate with each other, locate prey, and navigate their watery home. Navy sonar cuts through the water like a knife, causing whales to panic in pain and confusion. Whales will travel far distances to escape the sound, disorienting and sometimes stranding them. The animals are likely to change depth too quickly out of fear, which can lead to decompression sickness as well as bleeding from the eyes, internal ears, and even the brain. Whales will even beach themselves rather than have to stay in the water with the sonar. In 2000, 16 whales were found beached in the Bahamas after Navy ships had used sonar in the area.

This sonar is a deadly disturbance. Experts say that a no-sonar zone should be at least 1,000 beyond where the endangered orcas are located at any given time. The Navy's plan would blast the sonar within a mere 100 yards of the terrified whales.

This proposal is irresponsible, cruel, and violent. Sign the petition if you want to protect Tahlequah, her new baby, and the entire population of Southern Resident orcas -- tell the U.S. Navy to extend its no-sonar zone to ACTUALLY protect endangered killer whales!
Sign Petition
SHAREShare With FriendsTWEETEMAILEMBED
Sign Petition
See more petitions:
You have JavaScript disabled. Without it, our site might not function properly.

Care2
The killer whale who mourned her dead baby for 17 days just gave birth again, but she and her new baby are in danger
SHARETWEET