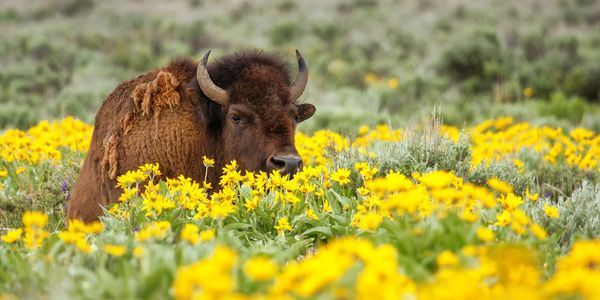 The only wild bison population left in the U.S. is partially slaughtered every year. Stop the Yellowstone bison cull!

Nothing quite epitomizes the wildlife and landscape of the United States like the American bison. DNA studies of ancient fossils suggest that this iconic animal has thrived on the lands now known as Canada, Mexico, and the U.S. for almost 200,000 years.

But in the 1800s, white settler colonialists hunted and slaughtered bison almost to the point of extinction, decimating a material, spiritual, and cultural cornerstone of many Indigenous tribes. Thankfully, tireless conservation work by tribal leaders and their allies kept the bison population from dying out completely.

Now, in the year 2021, there is only one small wild population of bison left -- bison who are direct descendants of their ancient ancestors, unbred with captive bison or cattle. And every year, because of pressure from the cattle industry, a large part of that population is needlessly slaughtered.

Every year, hundreds of bison -- or in some cases, like in 2017, over 1,000 -- are killed even though the entire Yellowstone population is less than 5,000. A set number of bison to be "culled" are shot dead as they unknowingly cross out of their shielded range of Yellowstone looking for food. Those who aren't horrifically felled by guns in the wild are captured, rounded into cramped trailers, and brought to slaughterhouses.

The cattle industry is so scared of bison roaming outside of the park because of a disease called brucellosis which, if transferred from bison to cattle, can cause "infertility, abortions and scarce milk production." But the thing is, there is no record of this disease ever being transmitted from bison to cattle.

Even so, it's understandable that cattle ranchers would want to be careful -- many, many people in the states surrounding Yellowstone National Park depend on that industry for their livelihood. But there are other ways of maintaining the bison population, in and outside of Yellowstone. These other management methods would mean no bison need to be slaughtered, ripped from their ecosystems and the tribes that would use and treasure them if given the chance.

The infrastructure is already there -- a bison quarantine facility built by the Fort Peck Tribes sits in the northeastern part of Montana, ready to receive bison from Yellowstone who can then be sent to tribes in order to grow or establish conservation herds. The only problem there is that Montana won't even allow bison to be shipped there until they've undergone two initial quarantine phases. Right now, quarantine pens at Yellowstone can only hold 105 bison.

If these quarantine pens were expanded to hold the number of bison that need to leave Yellowstone National Park in order to keep those herds within park limits, no bison would need to be slaughtered, and the U.S. could stop the cycle of wiping out these lands' natural wildlife and an animal that Indigenous people have cherished, utilized, and respected for centuries. There's just no excuse not to do this.

Sign the petition to demand the yearly bison cull is canceled! If they expand the bison quarantine pens at Yellowstone National Park, there would be no need for this cruel "cull."

Care2
The only wild bison population left in the U.S. is partially slaughtered every year. Stop the Yellowstone bison cull!
SHARETWEET