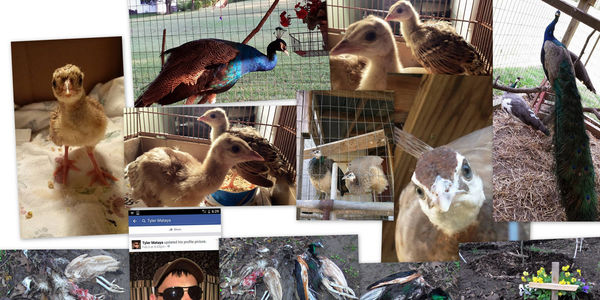 Justice for the Brutal Torture, Mutilation & Murder of My Peacocks

A man entered my home and stole several items. He then went to our coop and viciously tortured, mutilated & killed 3 of my pet peacocks. He tore at them. He ripped their feathers away taking hunks of flesh with them. He chopped at them & beat them into a pulp with a garden tool, so violently, the tool broke in half & the sharp edge was covered in blood.

Please sign my petition to request that the local prosecutor seek the maximum sentence and jail time for this monster. Thru the hard work & efforts of our Jefferson County, MO Sherriff’s Dept., he was located, most of the items were recovered & I was told by the officer that he confessed. Tyler Mataya is now charged with 3 felony counts for animal abuse involving torture/mutilation, 1 felony count of theft and 1 misdemeanor count of tampering with evidence. (violating the probation he had just received Jan 2016 for other crimes)

As to why he did these horrible acts, his excuse was that he took a couple of Xanax & blacked out. I, nor many reasonable people, believe this excuse.

As of January 2016, the FBI is now considering animal cruelty & tracking it as they would arson or homicide. These "Crimes Against Society" are good indicators as to a persons future behavior.

I need your help with this petition to respectfully request that the Prosecuting Attorney's office makes no deals with Tyler Mataya. To request that they seek the maximum penalty under our laws for all 5 of the crimes Mataya is charged with. The max would be 19 years, however, with our systems and prisons the way they are, society would be lucky if Mataya served 5-7 of those. Anything less would be unacceptable in my mind.

Also, I intend to forward this petition to the Judge who handles this case to, hopefully, be used in the penalty phase for sentencing.

Thank you for taking the time to sign this petition & PLEASE pass this along/SHARE with your friends and neighbors so that they may also sign.

FB Page = Justice for my Peacocks

view the video / NBC (ksdk) News Report on this case

To the Office of the Prosecuting Attorney/Jefferson County, MO

We appreciate the work you are doing in the case of ST v Tyler S Mataya #16JE-CR00619 and support your diligent efforts to bring about justice for the victims in this case.

We would submit to you that the "victims" are not limited to the homeowners/pet owners in this case, but rather, the peacocks themselves as intelligent, defenseless animals who suffered needless horrors before they were brutally killed.

Further, this crime is against all of society.  As evidenced by the fact that, as of January 2016, the FBI is now tracking animal cruelty as "a Crime Against Society" just as they track arson & homicide. This has come about because they know that these acts of criminal behavior are a good indication of future behavior.

Our community needs to be protected from anyone who would commit such crimes, for as long as possible.  We understand that, even were the courts to give this man the "maximum" penalty these crimes carry of 19 years, there is a high probability that he would only serve a fraction of that.  Which would mean he could be terrorizing our citizens again in as little as a few years.

Also, when there is a verdict, we request that you forward this petition & all of its signatures to the Judge presiding over this case to be used in the penalty phase.

Care2
Justice for the Brutal Torture, Mutilation & Murder of My Peacocks
SHARETWEET