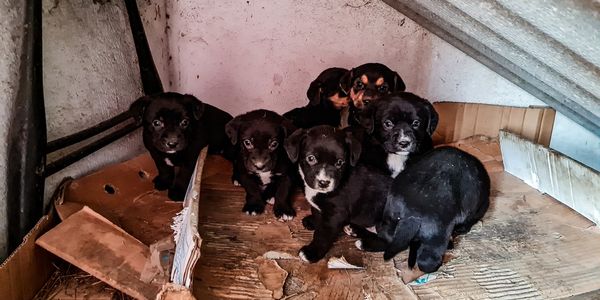 Demand Justice for Nearly 30 Puppies and Dogs Who Were Found Bleeding, Hairless, and Eating Each Other Alive

Please be warned, the details of dog abuse and neglect in this petition are deeply upsetting.

When someone calls in an animal complaint on a neighbor or community member, you can imagine the range of things police might expect to find – a dog that has been barking for hours on end, pups that have gotten loose, and in the worst cases possibly instances of abuse, neglect, or hoarding. But nothing could have prepared officers for what they would find when they stepped through the threshold of a home in Nicholls, Georgia.

Seven dogs and 21 puppies, some just days old, were found in what can only be described as conditions straight out of a nightmare or horror film.

Sign the petition and demand that prosecutors recommend a lifetime ban on animal ownership for the person behind this horrific case of animal cruelty.

Those 28 dogs described above were the ones officers found still alive. But there were some dogs in the house that had already died – and a source describes their condition as "dismembered." It's not clear who or what ripped these poor apart; it could have been their human abuser, or it could have been other dogs since there was no food to be found.

That lack of food had even driven some of the adult dogs to start literally eating the puppies alive because they were so starving. Some of the adults were so covered in fleas that they had become completely hairless, their bare, tender skin bleeding profusely.

Nicholls Police Department obviously hoped to rescue these poor dogs, so they took all 28 that were still alive to a veterinarian. Tragically, not one of them could be saved – every single dog and puppy had to be euthanized after the violent abuse and neglect that had endured.

This case is a tragedy, plain and simple. However things got to this point in this woman's home, they cannot be allowed to escalate like this again. The woman responsible is being charged with eight counts of animal cruelty, but even if she is found guilty, she may only be sentenced to prison time and monetary fines – neither of which is truly able to protect other animals once she has served her time. That's why we need to urge the prosecutors in this case to recommend, as part of her sentencing, a lifetime ban on animal ownership – we owe it to the innocent, defenseless animals of Georgia.

Add your voice to the call for a lifetime ban on animal ownership for this person! Sign the petition today!

Care2
Demand Justice for Nearly 30 Puppies and Dogs Who Were Found Bleeding, Hairless, and Eating Each Other Alive
SHARETWEET