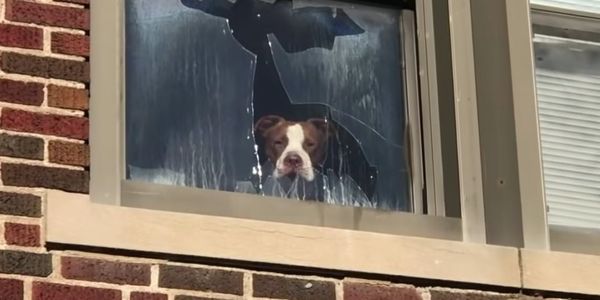 This Sweet Pup Was Found in a Dilapidated, Boarded Up Building Where He Had Been Trapped and Starving For a Long Time

All over the country, students are filling school classrooms again after last year's sweeping lockdowns to stop the spread of the coronavirus. They are grappling with what safely learning in person looks and feels like during a pandemic as their parents and teachers work to keep them safe.

One school in St. Louis, Missouri remained shut down -- shuttered completely, in fact, and its students sent to different buildings. But one sweet soul was recently discovered roaming its broken glass and debris filled halls -- a starving, trapped, and desperate pitbull.

Thankfully, rescuers saved the sweet pittie that they fondly named Teacher's Pet in time. But the question remains: how did he come to be trapped on the second floor of a boarded up building? Sign the petition to ask St. Louis Authorities to investigate! (An earlier version of this petition also asked the Humane Society of Missouri's Animal Cruelty Task Force (ACT) to investigate, but that organization is not a law enforcement agency and instead is an animal welfare organization that provides rescues animals from distress, abusive situations, and natural disasters. The target of this petition has since been modified to reflect this.)

In a YouTube video posted by Stray Rescue of St. Louis, you can watch every moment of sweet Teacher's Pet's rescue. Rescuers had been called about anguished howls coming from an abandoned school building, so they came to investigate. When they looked up, they saw Teacher's Pet's brown and white face peering out at them from a shattered window -- if you look closely, you can almost see his head rocking back and forth from the force of his happy tail. He was saved.

Teacher's Pet had taken up camp mainly in one classroom; rescuers could tell from the amount of feces that was there. That and his skin-and-bones state also alerted them to the fact that he had been trapped there for far too long. They also looked for clues as to how he got there -- and what they realized was quite bleak.

Other than "the shattered remains of a first-floor window...on the other side of [which] was a 12-foot drop," there was no way for Teacher's Pet to have gotten into the boarded up building unless he was "deliberately dumped." Rescuers themselves had a difficult time getting in to save them, and he hadn't suffered any injuries like cuts from glass or broken bones from a fall. St. Louis' Animal Cruelty Task Force must work with local authorities to find out if anyone abandoned him to die in that derelict fortress, and stop them from harming any other animals.

Teacher's Pet was adopted just weeks after his rescue. But other animals may not be so lucky. Authorities need to get in front of this so that it doesn't happen again! Sign the petition imploring them to do so without delay!

Care2
This Sweet Pup Was Found in a Dilapidated, Boarded Up Building Where He Had Been Trapped and Starving For a Long Time
SHARETWEET