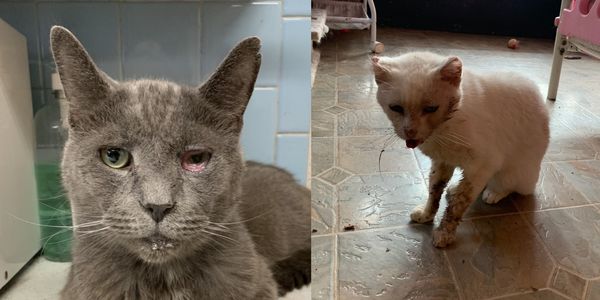 When the humane agent and veterinarian walked into Caroline's Kids Pet Rescue and Sanctuary, they must have had the wind knocked out of them. Over 200 cats were crammed into the house which had been repurposed to serve as a safe haven for stray, sick, or unwanted kitties. But this was not a safe haven -- this was a nightmare. They discovered that "the medical state of a majority of the cats was critical." Pictures show filthy cats, their fur matted and skin angry with irritation and infection. In them one can see the rooms covered in feces and a dirty syringe in the sink. When the Lake Humane Society seized the cats, desperate to remove them from the abominable conditions, the horror continued -- 49 of the cats were dead. 161 more were saved, but will continue to need treatment for countless ailments.

This abuse cannot be tolerated. Sign the petition and demand that Lake Humane Society Prosecutors charge Caroline's Kids Pet Rescue with animal cruelty, and make sure the facility is closed down for good.

This is not the first time that Caroline's Kids Pet Rescue and Sanctuary in Plainesvill, Ohio has come under investigation for cruelty towards its animals -- kitties that have already had a hard life as strays, as abandoned or unwanted pets, or suffering from medical problems. In 2016, the Lake Humane Society found that of the 260 cats at the sanctuary, over 150 needed immediate medical attention. Thing were so bad that the rescue's two owners and two other employees were convicted of animal cruelty -- a whopping total of 24 counts. A new person took up the position of the sanctuary's director in January, 2020. But obviously that was not enough to change the horrendous cycle of abuse.

How could a facility that boasts a mission of saving and caring for cats perpetrate such negligence, verging on violence? Even if their hearts were in the right place, they should have known the pain that these cats were in was not right and asked for help from other rescues, sanctuaries, and humane societies -- the network of animal welfare organizations is known for helping each other for the good of all animals.

This is the last straw. This 'rescue' was already given a second chance, and it has clearly proven that this abuse is a pattern they have been unable to break. It's time Caroline's Pet Rescue and Sanctuary close its doors for good.

Sign the petition and ask the Lake Humane Society Prosecutors to charge those involved with animal cruelty, and to shut down this facility for good!