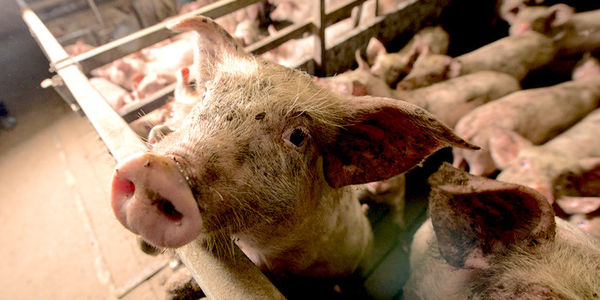 Factory Farming Is Killing the Planet, Our Health, and Our Commitment to Humane Animal Treatment. Ban Factory Farms Now!

We've all seen the horrifying footage from inside factory farms. Animals lined up in tiny wire barracks with nowhere to run, move, or bond with family members. Chickens with their beaks chopped off to reduce pecking, gagging to death on their own blood. Cows bellowing out for their young offspring, crying to be reunited with their calves — but they never will be.

This is just a normal day at any of the 25,000 factory farms currently operating in the U.S. More than 1.6 billion creatures — sociable pigs, dependable cows, inquisitive chickens, and more — are currently locked up in these mesh prisons for livestock, living out the only days of their existence in torment until they're slaughtered for profit. In fact, of all animals farmed in the U.S., 99% live on factory farms.

Luckily, Senators Corey Booker and Elizabeth Warren are teaming up to push legislation that would finally ban large-scale factory farming in the United States over the next 20 years. This is huge! Please sign the petition to support Senators Booker and Warren in this effort.

It might seem like factory farming was invented to serve humans, but actually, it was invented to serve just a few humans — namely, a small handful of super-rich corporate CEOs. They want to milk, prod, and wring as much out of these helpless, trapped animals as they possibly can because the more innocent beings they can squeeze onto their metal "farms," the more blood money they make.

These corporate millionaires don't care at all about the workers at their factories, or even about the health of the consumers eating the finished products. This has become even more clear during the COVID-19 pandemic. Huge outbreaks of the virus have raced through meat plant after meat plant, yet corporate leadership still wants them to churn out the rations. Even before COVID, slaughterhouse staff often experienced PTSD symptoms and other mental health challenges because of the horrendous suffering they were forced to witness and perpetuate.

Consumers haven't been winning, either. In order to keep all these overcrowded, overstuffed animals alive in such unnatural conditions, factory farms pump their livestock full of antibiotics to ward off infections. To make the animals bigger, juicer, and plumper, they're pumped full of growth hormones. None of this is good for the humans gathered at the dinner table.

As if all that weren't enough, factory farming is also one of the country's biggest contributors to climate change and greenhouse gas emissions. According to the Washington Post, "If cows were their own country, they would be the third-biggest greenhouse gas emitter in the world." On top of that, this type of farming uses extensive amounts of land — not just for the animals, but also for their feed. That's why the bill co-sponsored by Senators Booker and Warren would hold corporate farms accountable for their contributions to environmental damage.

The facts are clear: factory farming is a horrific practice that's making us all sick — the workers, consumers, and Mother Earth all included. It needs to end, now.

Urge the U.S. Congress to pass this crucial legislation to ban factory farming in the U.S.!
Sign Petition
SHAREShare With FriendsTWEETEMAILEMBED
Sign Petition
See more petitions:
You have JavaScript disabled. Without it, our site might not function properly.