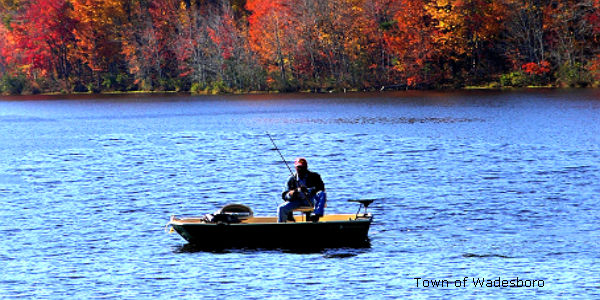 The US Geological Survey has been studying intersex fish in US rivers and finds the effects of endocrine-disrupting pollutants in our waters to be worse than expected.

USGS first found signs of reproductive disruption in the Potomic River Basin and went on to discover intersex characteristics, such as eggs in male fish testes, in the Delaware, Susquehanna and Ohio River basins. But so far the River most affected is North Carolina’s Pee Dee, which had the “highest rate of intersex fish at 80%,” according to Truthout.

Because the hormonal changes in male fish threaten species survival, scientists are trying to identify the main sources of contamination. The primary suspects are pesticides and herbicides, which mimic hormones, and hormones themselves, from human and animal waste.
A big part of the problem in NC is the way pigs are factory-raised for food production. An NC State University scientist studying intersex fish told Truthout that “pig waste,” applied to crops before it runs off into waterways, is “chock-full of estrogens.”

Food & Water Watch notes several serious issues with hog farming in NC, including “heavy use [of] antibiotics, artificial hormones, and other chemicals to promote fast growth.” F&WW says “It’s time to move North Carolina away from polluting factory farms and towards a sustainable and diversified agricultural economy.” Certainly this would be one of the most effective and humane solutions to the growing pollution of our waterways.

Tell NC to get the pig waste and other hormone disrupters out of the Pee Dee River!

We, the undersigned, say there should be an immediate and decisive response in NC to this newly revealed threat to waters, wildlife and humans, particularly the Pee Dee River.

According to a report by the Los Angeles Times, the USGS’s Pennsylvania survey found Intersex males “at every site where smallmouth bass were collected and their condition was generally worse in places just downstream from wastewater treatment plants…”
Researchers told the Times they were surprised by the “number of fish affected and the severity.”

The Pennsylvania Department of Environmental Protection’s reported intent to continue studying and sampling “until it has an understanding of how these compounds may or may not impact the aquatic life in all streams and rivers…” is really not appropriate for NC. NC has known for decades about the harmful impact of its huge agricultural operations on the environment - revealed particularly during the investigation of the pfsteria outbreak in the Neuse River in the 1990s.

The USGS study, adds the Times, reported that the “most common hormone found in water and soil samples was estrone, a potent endocrine-disrupting chemical often found in sewage from wastewater plants and the manure of animals such as cows, chickens and pigs.”

This is just more evidence to support F&WW’s call for North Carolina, which raises “more than 10 million hogs” on factory farms, to take steps to move toward a more humane, “sustainable and diversified agricultural economy.” In the meantime F&WW suggests North Carolinians pressure their representatives to
support legislation that would:
1) Set a deadline for ending the current industry practice of keeping open-air hog manure lagoons
2) End the practice of spraying this liquefied animal waste onto fields that are often within a few dozen feet of a neighbor’s home.

We join F&WW in its push for this legislation regarding pig factories and emphasize the urgent need for NC act immediately to remove all sources of endocrine-disrupting pollutants from the Pee Dee River.