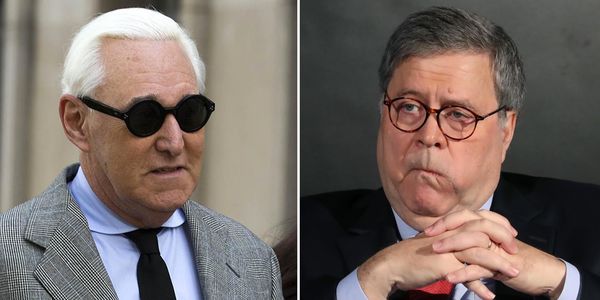 On November 15th, 2019, Roger Stone was convicted on seven felony counts of lying to Congress under oath and witness tampering, facing a maximum prison penalty of 50 years for his crimes. The sixth senior advisor to President Trump convicted of federal felony charges to date, Stone is widely considered one of Trump's closest confidants with a relationship stretching back nearly four decades and a role in Republicans' dirty work dating back to Nixon.

On Monday, February 10th, the federal prosecutors charged with handling Stone's case formally presented their long-awaited sentencing guidelines, recommending 7 to 9 years incarceration — standard for his crimes — for the 67-year-old felon.

Upon hearing the news, Trump fired up his well-oiled grievance machine and tweeted, "This is a horrible and very unfair situation... Cannot allow this miscarriage of justice!"

Within hours, in an extraordinary and unprecedented move, Attorney General Bill Barr – bending to the unchecked will and amoral whim of Trump  – issued a statement overriding the prosecutors' sentencing recommendation calling it "extreme and excessive and disproportionate to Stone's offenses." The blowback was swift and jarring. All four career prosecutors handling the case formally withdrew from further participation, and one actually resigned in protest of the flagrant corruption.

Attorney General Barr has weaponized the Department of Justice and shredded any notion of genuine independence from the executive branch. Demand that the DOJ Inspector General investigate AG Barr's nefarious interference in the Stone case. The integrity and resilience of basic American governance is at stake.