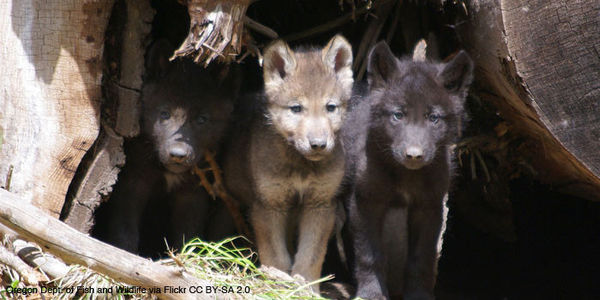 Help Save Oregon's Wolves From Poaching and Useless Killing!

In August, the Oregon Department of Fish and Wildlife (ODFW) killed two wolves. Then two more… all at the request of ranchers.

The wolf population is lower than it was in 2015 when wolves were removed from the endangered species list, and if we don't take action now, we may not have any wolves left in Oregon.

Not only has the ODFW been bowing to the demands of the cattle industry by killing entire packs, but the new plan by ODFW includes a provision to allow for trophy hunting of wolves. To make matters worse, the agency will no longer proactively provide the public with information about wolf killings.

Despite scientists quoted in ODFW's own plan asserting that the plan is fundamentally flawed, ODFW is still moving forward. We need to take action and stand up for wolves.

The cattle industry wants to protect livestock. But it's just people like you and me looking out for wolves. And frankly, there are better ways to protect cattle than by killing wolves.

We need a plan that emphasizes transparency, accountability, and preventative measures – not something that allows for trophy hunting and state agencies that bow to the will of large livestock producers.

The Draft Revised Wolf Management Plan published by your agency on April 11, 2017 moves the ODFW in a direction that would be shameful for Oregon. Killing wolves is expensive and unnecessary and does not recognize the scientific evidence regarding the reasons why depredation occurs. Any killing should be done as a last-resort, after all non-lethal options have been exhausted.

The killing of wolves is an issue that affects us all, since wolves play a vital role in changing prey roaming patterns, leading to an increase in the health of the environment. With such a controversial and flawed outcome, it is imperative that the public be informed of all wolf decisions, and the draft plan's proposal to stop this information goes directly against the health of our democracy.

While the intention may be to protect livestock, killing wolves will have the opposite effect, disrupting pack dynamics and leaving young wolves without a leader to teach them to stay away from livestock. Research has shown this disastrous loss of life only makes it more likely the remaining members of a pack will turn to livestock to feed themselves and their offspring.

Livestock managers are compensated by the state for their losses, which have been minimal compared to the loss of life that occurs due to sickness, thieves or other predators. Wolves are a native species here in Oregon, we should not be prioritizing domesticated animals over the preservation and success of a keystone species like wolves.

We urge ODFW to reconsider the draft plan. We need a plan that focuses on minimizing loss of life, maximizes preventative measures, includes clear accountability, and eliminates trophy hunting.